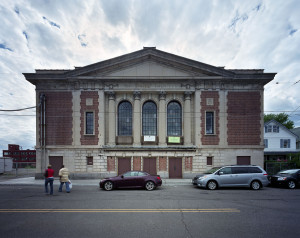 The Goodwill Theatre (36 Willow Street) was built in 1920 in Georgian Revival style with funds provided by George F. Johnson for the enjoyment of Endicott-Johnson employees and village residents. In its early years, the venue was largely used for Endicott-Johnson employee minstrel shows, boxing matches, traveling shows and concerts. It was leased in 1928 and operated as a movie-house for thirty years, then closed in 1960. It re-opened for short periods during the 1960’s. In 1978, plans for a conversion of the building into a dinner theater were abandoned mid-construction and the space languished for another 22 years.

Recognized as a pivotal resource of the Susquehanna Heritage Area System, the    Goodwill Theatre proves to be emblematic of the paternalistic position taken by industry at the turn of the century, a trend that is clearly articulated through the George F. Johnson story. More specifically, the building stands as a monument to Johnson’s policies of “Industrial Democracy”, and their far-reaching effects that resonated outward to impact on the economic development of the Susquehanna Valley, patterns of immigrations and migration, a

nd the daily life of the local community. Underlying Johnson’s commitment to the notion of “fair play” and his belief “that you grant your worker a mind and a heart” was an attempt to break down the insurmountable barriers between capital and labor. The establis

munity facilities and amenities like the Goodwill Theatre, the Municipal Building and the E-J medical building were just part of Johnson’s attempt to create a sense identity while fostering the promise of prosperity. The provision of a recreational facility was simply one element within Johnson’s larger scheme. The Goodwill Theatre, essentially still intact, proves to be one of the finer examples. The structure, designed by Binghamton architect Sanford Lacey, is a characteristic interpretation of the Neo-classical style. 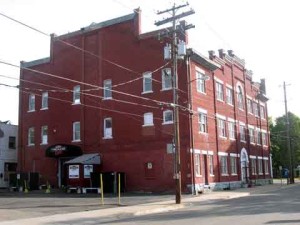 The Municipal Building (46-48 Willow Street), built in 1899 by Sullivan and Bagley, was designed for the Johnson City Mayor’s Office, fire trucks, an elaborately paneled Court Room, and a police and firemen fitness center with a basketball court on the top floor. The building offers approximately 25,000 square feet of usable space, including some unusually large volume interior spans that make it ideal for reuse as rehearsal space and an alternative theater performance venue, as well as support space for the performing arts complex and professional training academy. 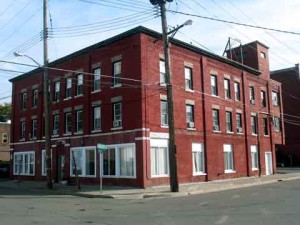 The former EJ Medical Building, (67 Broad Street) built in the 1800s, is the oldest of GWT’s properties. It was purchased by Endicott Johnson in 1918 and served as part of EJ Medical Services for EJ workers and immediate family members. At one time, the facility housed Endicott-Johnson’s maternity ward. As part of EJ’s “cradle-to-grave” policy, each baby born to an EJ worker received a silver spoon and a $10 certificate to begin a savings account. Purchased by GWT in 2005, the building is listed as a significant structure in the Susquehanna Heritage Area, and is currently the home of the Goodwill Theatre staff offices.

Goodwill Theatre Inc. was established in 2001. Its mission is to create a professional performing arts complex and magnet training academy that will enrich the lives of our residents and visitors. In October of 2007, GWT opened the Firehouse Stage as the first performance venue of the complex. In March of 2008, the Firehouse Stage became the Schorr Family Firehouse Stage. Currently, the venue hosts over 65 events, including cabaret, classics, theater for young audiences, classical piano, jazz, puppets, as well as private rentals, each year.

The Goodwill Theater Complex and Professional Training Academy will house at least three year-round performance venues including the 850-seat historic proscenium theater in the Goodwill Theatre and two theaters in the 46-48 Willow Street property: a 300-seat theater on the third floor and the 125-seat multi-purpose SCHORR FAMILY FIREHOUSE STAGE on the first floor. Lobbies, rehearsal halls and classrooms will also be part of the complex. Goodwill Theatre will present and create theatre for young audiences, new work, dance, music, visual and media arts as well as serve as rental space for local cultural organizations. The multidisciplinary professional training academy will offer post-graduate degree, certificate and audit programs in such areas as stage performance, stage directing, stage management, arts administration, design disciplines, playwriting, dramaturgy, technicians and run crew and will be housed in these historical buildings and the connecting new structure. As a result, the Goodwill Theater Complex and Professional Training Academy will act as a catalyst for revitalizing Johnson City’s downtown by building confidence and trust in potential investments in downtown development. As proven by other historic theater renovations, the renovation of the Goodwill Theatre Complex will spur private sector investments in downtown restaurants, shops, and office space. Additionally, the project will help attract and retain a skilled and educated work force and attract approximately 100,000 into the center of Broome County. It is estimated that those 100,000 people will spend roughly $1.5 million annually. Therefore, the worth of this important project cannot be disputed.

The Goodwill Theatre has received a grant from the Documentary Heritage Program of the New York State Archives, a unit of the New York State Education Department. The goal of this grant is to undertake a project to identify and survey undocumented historical records pertaining to the development and history of the medical program undertaken by the Endicott Johnson Corporation. Such historical records include materials such as plans and polices of the health benefits, medical benefit booklets, photographs, memorabilia, correspondence, nurse training information, and records pertaining to numbers served and cost of services for the company.

Got a story about the Goodwill Theatre or the Firehouse building that you would like to share?

We would love to use your information! Download a GWT Story Catcher History Form here. Completed forms can be returned to: GWT Administrative Offices, 67 Broad Street, Suite 210, Johnson City, NY 13790 OR fax it to 607.729.0785 OR email it to cspringer@goodwilltheatre.net.