Written by Gene Zion and with distinctive illustrations by Margaret Bloy Graham, Harry the Dirty Dog  has captivated young people since 1956 with the misadventures of its lovable — if somewhat dingy — canine hero.   Acclaimed producer ArtsPower National Touring Theatre is bringing this classic book to the stage.  Harry the Dirty Dog  brings smiles to the faces of audiences everywhere with its fun-filled plot and inspiring message. The Goodwill Theatre is presenting this original production on Saturday, October 11 at 11 AM and 2 PM at The Schorr Family Firehouse Stage.  Harry the Dirty Dog is part of the Story Time Theater Series sponsored by the BOOKs program with Senator Libous in partnership with Morrisville State College.

Harry has a white coat, black spots, and a very loving family.  He is, generally speaking, one of the 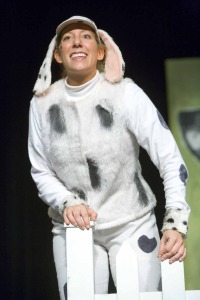 happiest little dogs around.  There aren’t many things Harry doesn’t like…but baths are certainly on the list!  So when the time comes for his wash, Harry’s only option is to bury his scrub brush and run away from home.

He passes a marvelous day getting as messy as possible:  he plays in dirt, in coal, in all the grimiest and most wonderful places imaginable.  Exhausted, he comes back home at last — only to discover that his family doesn’t recognize him!  His efforts have turned him from a white dog with black spots into a black dog with white spots.  Now what is Harry to do?  Why didn’t he think before how important his family was to him?  And how can he show them who he really is?

Harry the Dirty Dog was adapted for the stage by ArtsPower’s artistic director Greg Gunning, who also wrote the lyrics and directed the production.  Composer and orchestrator Richard DeRosa created the original Broadway-style score.

“ArtsPower has consistently terrific shows for young audiences and for families to enjoy together,” said Naima Kradjian, CEO.  “We are always pleased with the quality of the performance and audiences young and old will love Harry the Dirty Dog.”

Mark and Gary Blackman founded ArtsPower in 1985 and have been steering its course ever since.  ArtsPower has grown into one of America’s premiere producers of professional theatre for young and family audiences.  Its 27 professional touring productions have been seen by 12 million people in 48 states — from Alaska to Florida — in hundreds of the country’s top cultural centers, including the Kennedy Center in Washington, D.C. and Lincoln Center in New York.

For more information on the Verona, New Jersey-based company or any of its programs, please call 973.239.0100 or visit ArtsPower’s website at www.artspower.org.

Tickets for Harry the Dirty Dog are $10 for adults, $8 for seniors and students. The Firehouse also offers a 20% discount to veterans and teachers; however, discounts cannot be combined. Tickets can be purchased online at: www.goodwilltheatre.net or by calling the Box Office at (607) 772-2404, ext. 301.