Beat the Winter Blues with some Comedy! 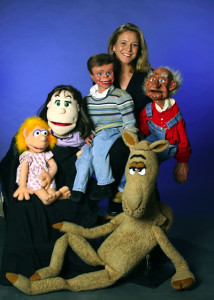 Have you ever had a childhood hobby that got out of hand? That explains Lynn Trefzger’s start as a ventriloquist/comedienne. For over 30 years, Lynn has given life to a trunk full of comical characters and will be bringing that trunk to the Schorr Family Firehouse Stage on Saturday, February 21 at 7 PM.  This performance is part of the Goodwill Theatre’s Big Apple Comedy Club series, underwritten by the Schorr Family and sponsored by Bates Troy.

One of the ways to beat the winter blues is to do fun things.  What could be more fun than a ventriloquist and her trunk full of zany characters?

Audiences are treated to Lynn’s vocal illusion talents, when they may meet a drunken and lovable camel, a grumpy old man, a feisty little girl, and may even see some other audience members who are brought up for the action!

Lynn’s off-the-wall audience interplay is riotously funny, no two shows are alike! Her performances are tailored for both family and adult audiences.  Our performance is geared to a more adult audience.  Think of it as a PG-13 rating.

Lynn (and her many voices) has appeared on ABC, TNN, A&E and Lifetime. She was recently featured in the film, “I’m No Dummy” a documentary film which provides an intriguing exploration into the past, present and future state of ventriloquism in pop culture today.  It also stars Jay Johnson, Jeff Dunham and Jimmy Nelson.

Her vocal illusion talents were first brought to national audiences on TV’s popular “Star Search” and she has since performed with artists including Jeff Foxworthy, Ray Romano, Drew Carey, and Faith Hill.  Her off-the-wall audience interplay is riotously funny, and her performances are tailored for both family and adult audiences.

Tickets for the Lynn Trefzger are $15. The Firehouse offers a 20% discount to veterans and teachers; however, discounts cannot be combined. Tickets can be purchased online at: www.goodwilltheatre.net or by calling the Box Office at (607) 772-2404, ext. 301.