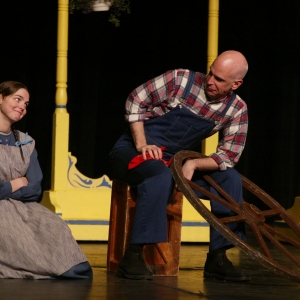 Beloved character Anne of Green Gables has been featured on license plates and postage stamps, and soon, she’ll be at the Schorr Family Firehouse Stage.

Goodwill Theatre will offer a children’s musical based on the classic book by Lucy Maud Montgomery, “Anne of Green Gables”, on Saturday, April 27 at 11am and 2pm.

Local biographer Liz Rosenberg, who wrote “House of Dreams: The Life of Lucy Maud Montgomery” will be at both performances to answer questions about the author of the beloved “Anne” series and sign copies of her book.

The classic tale of a young orphan girl whose dauntless spirit transforms her adoptive family is brought to life by Manhattan’s ArtsPower National Touring Theatre, and sponsored by Lockheed Martin.

Matthew and Marilla Cuthbert want a boy to help with the chores. They are not expecting Anne Shirley, an orphan with little more than a tattered carpet bag and a big imagination. This popular and heart-warming musical tells the story of vivacious Anne and her journey to find the family she’s always wanted.

Set at the turn of the century, “Anne of Green Gables” features a rich musical score, beautiful period costumes, and imaginative sets. Written and directed by Greg Gunning, with music by Richard DeRosa, “Anne of Green Gables” has been performed in some of the leading cultural centers across the United States since its premiere in 1993.

The novel “Anne of Green Gables” was published in 1908 by Canadian author Lucy Maud Montgomery, and has since sold more than 50 million copies, and been translated 36 languages. It is taught to students around the world, and is especially popular in Japan. Montgomery continued the story of Anne Shirley in a series of eight sequels. The Green Gables farmhouse which inspired Montgomery is located on Prince Edward Island, and many tourist attractions have been developed based on Anne. There have been numerous adaptations for the stage, as well as two films and several television series based on or inspired by the novels, including an animated version for PBS.

“Bringing a child to the theatre for the first time can be nerve-wracking for parents,” said Naima Kradjian, Goodwill Theatre CEO. “They want to introduce their kids to live performance, but they worry the show won’t hold their child’s attention, or that their child will be disruptive. We try to make it easy for parents, by offering shows that are engaging for children, and relatively short, and by providing a free craft activity for children at every performance.”

“The shows do come with an age recommendation, but that is just a guideline, and all ages are welcome,” Kradjian continued. “Quality children’s shows can be enjoyed by parents, too.”

ArtsPower National Touring Theatre was founded in 1985 by Gary and Mark Blackman. For 33 years, they have created outstanding, spirited theatre that speaks intelligently to and resonates powerfully with audiences, earning a national reputation as a reliable source of compelling theatre that connects with both children and adults.

The Schorr Family Firehouse Stage is located on the corner of Corliss Avenue and Willow Street in Johnson City. For more information, contact the Goodwill Theatre Box Office at (607) 772-2404, ext. 301, or visit: goodwilltheatre.net or facebook.com/firehouse.stage