For one night only, Johnson City will become the City of Dreams as award-winning poet musician David Gonzalez and the Poetic License Band bring his fabulous musical vision to the Schorr Family Firehouse Stage at 5:00 p.m., Sunday, September 23.

City of Dreams unites poetry with Latin jazz, but it’s more than that. Hearing the poetry’s easy references to New York City and the richness of the Latin beats might lead to the conclusion that the City of Dreams is in fact the Big Apple, but it is not. It is a city made of dreams, not filled with them, and Gonzalez and his musicians make it a one-of-a-kind musical and theatrical experience.

“When I say ‘city of dreams,’ I am looking at the place where dreams gather,” said the Bronx-raised Gonzalez, who added that the show is probably only 20 percent about New York City. “It’s where our dreams, your dreams, my dreams, our neighbors’ dreams, where they intersect, or connect or become mutual, or mutually empowering…or not. So, that’s sort of universal. And yes, there are some parts that really nail it to the city, too.” 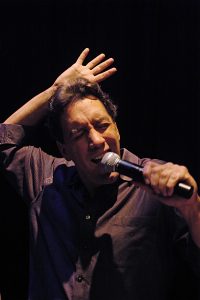 Gonzalez, whose many honors include commissions for the Kennedy Center, engagements at London’s Royal National Theatre and a Drama Desk nomination, considers how best to describe his show, which others have described as a “diamond in a mambo/funk music box.”

“It’s spoken word, Latin jazz. It’s a mix. But it’s all blended together. It isn’t like music, then poetry.  It’s really entwined. It’s as if the voice is the fifth instrument,” he said. “ ’Latin Jazz’…you can do that in quotes because we dip into some gospel, some funk, some more abstract music and it ranges from the most achingly tender to quite expansive and powerful. It’s poetry you can dance to. There are a couple of places where the poetry stops and the music just percolates.”

And that percolating isn’t done by just anybody. Gonzalez is joined onstage by some very accomplished musicians who share his vision…and his groove.

“The music is very specific and sophisticated and the musicians are a quartet of top shelf musicians, just hard-hitting, soulful, New York Latin jazz veterans. Each of these players has a stellar biography. They all have toured the world. They are all masters in their own right,” he said. “The band has been together for so many years, so it’s really nimble. That’s one of the sweet things about it. It’s not a packaged type thing. The [Poetic License Band] just follows me as I read what the audience sends to me.”

“I do many different projects and this is the one I have the most fun at. Just to be in the musical embrace of these master musicians is one of the greatest joys of my life as an artist. It’s So. Much. Fun,” he said. “My objective is to meet the audience where they are and then, together, to lift us up to a place of greater perception, greater joy, stronger community. Through the particular and into the universal. That’s really where I’m at.”

Tickets are $25 for adults and $20 for seniors and students, and can be purchased online at goodwilltheatre.net or by calling the Box Office at (607) 772-2404, ext. 301. The David Gonzales and City of Dreams is the first performance in the next decade of entertainment at the Schorr Family Firehouse Stage sponsored by M&T Bank and IBM.