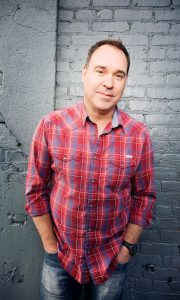 Goodwill Theatre will offer an acclaimed one-man comedy show at the Schorr Family Firehouse Stage in Johnson City on Friday, November 9 at 7pm.

When comedian Andy Pitz appeared on The Late Show with David Letterman, he thought he had finally ‘arrived.’ Pitz, a Buffalo native who now lives outside of New York City with his wife and six-year-old daughter, had been performing standup comedy for 12 years and had put a Letterman appearance square in his sights.

“It used to be that if a comic was on The Tonight Show with Johnny Carson, that was it. That was the Golden Ticket. Because at that time there were three TV stations and one Johnny Carson,” he said. “I wanted to be on Conan or Letterman and that was the goal I gave myself and it took about a year and a half to accomplish that, after being in comedy for 12 years.”

Pitz was in for a big surprise. There was no Golden Ticket. “I was so excited and I thought it was a career maker and I started shopping myself around agencies in New York, aiming for the bigger ones,” Pitz said, adding that he got many congratulations but nobody who signed him on. “It takes a lot more than that to get recognition now.”

However, a late night TV appearance is still far from a time waster. “It is a shorthand way of people putting you in a different category of comedian,” Pitz said. “It’s almost the first thing people want to know, have you ever been on television.”

And while Pitz may not be a household name, he enjoys a very busy and thriving career as a full time comedian and will appear, with his opening act, comedian Kendra Cunningham, at 7 p.m., Friday, November 9 at the Schorr Family Firehouse Stage in Johnson City.

One of the challenges for any comedian is coming up with a comedy routine that is not, in fact, routine.

“Getting married and especially having a child is just this whole treasure trove. I don’t really sit down and write anymore. Things my wife says and things my daughter says, they come out almost 80 percent done,” he said. “I could easily do 45 minutes of nothing but marriage jokes. But I don’t want to bore myself or the audience. I try not to do too much of one topic,” he said.

Pitz also doesn’t subscribe to the idea that comedians need to be political.

“If you don’t talk about politics, it’s almost as if, as a comedian, you are disappointing a certain segment of the comedy world,” he said.  “Anything political, anything even remotely divisive, just doesn’t go with the rest of what I am doing.”

Tickets are $15, and can be purchased online at goodwilltheatre.net or by calling the Box Office at: (607) 772-2404, ext. 301. The show’s content may not be appropriate for anyone under 18. Parental discretion is advised.