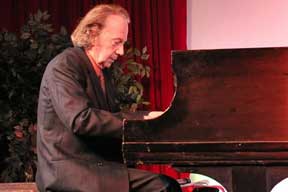 Covelli and Friends will present A Different Drummer on Sunday, March 8 at 2:00 PM for the second Classical Piano Plus! Series Concert at the Schorr Family Firehouse Stage.  This series consists of three concerts featuring Maestro John Covelli at the piano and is sponsored by NBT Bank and GDI Integrated Facility Services and is underwritten by Ed and Karen Levene.

Joining Covelli for A Different Drummer is world renowned steelpannist Liam Teague.  Teague will be performing some of his own compositions, as well as Tico Tico no Fubá by Zequinha de Abreu.  Teague and Covelli will perform, among other selections, Paganini’s Moto Perpetuo Op. 11 together and Covelli will conclude the concert with Gershwin’s Sleepless Night and Rhapsody in Blue.

“The Classical Piano Plus series with John Covelli and friends is always highly anticipated,” said Naima Kradjian, CEO. “It does often sell out, so please call early for tickets.”

Most local audiences remember Maestro John Covelli as the conductor of the Binghamton Philharmonic. Many do not realize he was a piano prodigy, pleasing audiences since the age of four. Chicago-born, John Covelli was credited in his youth with numerous concerts, broadcast recitals and special musical awards.  He performed at the Chicago Music Festival with the Chicago Symphony at age 9.  As a teenager, John was the only concert pianist ever to win the famous Godfrey Talent Scout Program and appeared in a series of nationwide CBS-TV performances. His New York debut drew rave notices from every newspaper and major publication present including The New York Times stating, “This is one of the best debut recitals in our recollection.” While conductor and soloist of the famed Seventh Army Symphony, he was selected special musical ambassador for USIS, gleaning accolades as featured touring soloist throughout Europe. 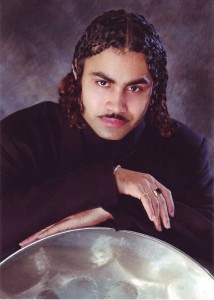 Hailed as the “Paganini of the Steelpan,” Liam Teague currently serves as the Head of Steelpan Studies and Associate Professor of Music at Northern Illinois University. Along with Clifford Alexis, he co-directs the NIU Steelband.

He has received many awards in his homeland of Trinidad and Tobago, including the Humming Bird Award (Silver) for “loyal and devoted service,” and won of a number of notable competitions such as the Trinidad and Tobago National Steelband Festival Solo Championship and the Saint Louis Symphony Volunteers Association Young Artiste Competition.

His commitment to demonstrating the great musical possibilities of the steelpan has taken Teague to Europe, Asia, and Australia, as well as North and Central America and the Caribbean.

Teague has collaborated with such prominent musicians as Paquito D’Rivera, Dave Samuels, Zakir Hussain, and Evelyn Glennie. As a performer and clinician, Teague has given presentations at several Percussive Arts Society International Conventions (PASIC) and at many educational institutions throughout the world.

He is steelband director at Birch Creek Music Performance Center in Door County, Wisconsin, and he has also taught and performed at the California State University Summer Arts Camp and at the Interlochen Academy for the Performing Arts.

Teague has served as musical arranger of the TCL Group Skiffle Bunch Steel Orchestra and Starlift Steel Orchestra for Panorama, the most prestigious steelband competition in the world.

To date, Teague has recorded eight compact discs, including Hands Like Lightning (1993), For Lack of Better Words (2002), Panoramic: Rhythm Through an Unobstructed View (2005) and Open Window (2010).

Tickets for Covelli and Friends are $25 for adults, $20 for seniors and students. The Firehouse also offers a 20% discount to veterans and teachers; however, discounts cannot be combined. Tickets can be purchased online at: www.goodwilltheatre.net or by calling the Box Office at (607) 772-2404, ext. 301.