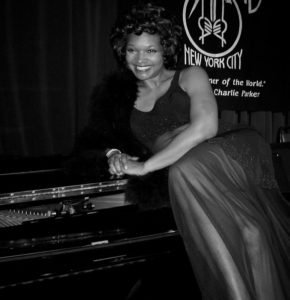 Cynthia Scott, a former Ray Charles Raelette, will sing her “journey with Ray” on Sunday, April 29 at 2pm, at the Schorr Family Firehouse Stage in Johnson City.

“This is going to be a smoking concert that you won’t want to miss,” said Naima Kradjian, Goodwill Theatre CEO. “Cynthia is a consummate professional, and she’s as gorgeous to look at as she is to listen to.”

Vocalist Cynthia Scott has performed jazz, blues, R&B, and gospel music for over three decades. Born in Arkansas, she was “discovered” by Ray Charles and has written a one-woman show about the experience, “One Raelette’s Journey”. She has performed all across North and South America, as well as Africa, Europe, and Asia. Chicago Tribune jazz critic Howard Reich called her “a mesmerizing vocalist.” After Charles’ death, Scott would go on to work with many of his star sidemen including Hank Crawford, Marcus Belgrave, Leroy Cooper and David “Fathead” Newman. In 2016, she was inducted into the Arkansas Black Hall of Fame in Little Rock. She was the featured vocalist of the Supper Club in Times Square for over ten years. She studied acting under Uta Hagen and Austin Pendleton, and performed in the touring musical, “Midnight in the Garden of Good and Evil”, a tribute featuring the music of Johnny Mercer, based on the bestselling novel by John Berendt. In 2004, she toured France and West Africa as a Jazz Ambassador for the U.S. State Department.

“I learned from Ray to tell the story and do it your way, with all your roots included,” said Scott. “I felt like I knew Ray’s spirit because when you work with someone as closely as I did with Ray, you learn so much. He was a great teacher to so many, and his music will live on.”

Paul Beaudry is a bassist, composer, producer, vocalist, and educator. A San Francisco native,  he relocated to New York in early 2001, and has since toured worldwide as a sideman with Steve Turre, Wycliffe Gordon, Allan Harris, Winard Harper and Eric Lewis and also performed in concerts or on recordings with such jazz greats as Clark Terry, Grady Tate, Jimmy Cobb, Charlie Persip, Frank Wess, Cecil Bridgewater, Billy Harper, Eddie Henderson, Roy Hargrove, Johnny O’Neal, Bruce Barth and Dave Valentine. He has toured in over 35 countries and is the leader of the quartet Paul Beaudry & Pathways, which released its self-titled debut on 2010 Dancing Spirit Records and its follow up release Americas on Soundkeeper Recordings in 2012. The group was chosen for a 2010 Latin America tour and a 2011 Central Asia tour for The Rhythm Road: American Music Abroad program co-sponsored by Jazz At Lincoln Center and the U.S. Department of State’s Bureau of Educational and Cultural Affairs. Beaudry is also currently on faculty at the Teachers College at Columbia University.

Percussionist Dwayne “Cook” Broadnax was born in Philadelphia and began playing drums in junior high school, while taking drum and music lessons at Settlement Music School, and performing throughout the tri-state area, with the Elks Marching Band and various local funk and rock bands. He continued his education at Berklee College of Music, in Boston, graduating in three short years. With diploma in hand, he returned to Berklee as one of their youngest faculty members. After moving to New York City in 1983, he toured with legendary organist, Bill Dogget. He then joined Grammy award winning blues artist, Johnny Copeland with whom he performed and recorded. Cook has also been a major force on several tours with Jimmy Scott and The Jazz Expressions.

Other upcoming Goodwill Theatre performances include ArtsPower’s “Nugget and Fang” on Saturday, May 12; and the Mason Warrington Orchestra on Sunday, May 20. The 2017-2018 season will conclude with a free outdoor Latin jazz concert, featuring David Gonzalez, on June 10.