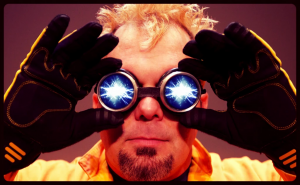 Is there anything children like more than blowing stuff up?

Goodwill Theatre will offer an educational science comedy show for families, “Doktor Kaboom: The Wheel of Science” on Saturday, April 13 at 11am and 2pm.

The presentation blends theatre arts with the wonders of scientific exploration. The show provides an educational overview of the modern scientific method, and fills children with wonder and curiosity by demonstrating spectacular applications of the physical sciences.

The “Doktor” is an over-the-top German scientist, part Mr. Wizard, part Mr. Rogers, played by David Epley, a graduate of the North Carolina School of Science and Mathematics. Epley has been developing, writing, and performing his original interactive comedy across the US and Canada, for over twenty years. Doktor Kaboom keeps his crowds riveted with interest and rolling with laughter, taking children and parents alike on a sidesplitting journey of increasingly spectacular science experiments designed to involve, excite, educate, and entertain.

Tickets are $10 for adults and $8 for senior citizens and children, and can be purchased online at goodwilltheatre.net or by calling the Box Office at: (607) 772-2404, ext. 301. The show is recommended for children 7 and older. All Goodwill Theatre children’s shows offer a free enrichment activity before the performance.

“This show is recommended for grades 3-6, but that is just a guideline, and all ages are welcome,” Kradjian continued.