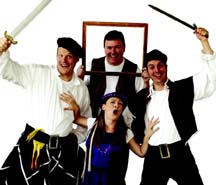 To be, or not to be, this isn’t your traditional Shakespeare! Join us on Friday, March 22 at 7 pm at the Schorr Family Firehouse Stage for an evening of fun and laughs as the Goodwill Theatre continues its Laugh Out Loud series with an interactive romp through “the Scottish play” presented by “the nearly world famous” DuffleBag Theatre. Considered one of his darkest and most powerful tragedies, Macbeth, written by William Shakespeare, dramatizes the corroding psychological and political effects produced when its protagonist, the Scottish lord, chooses evil as the way to fulfill his ambition for power. However, when the drama is interpreted by a group of jokers with a bunch of props, the darkness turns to comedic light!

“Presented as an improvisational comedy with audience participation, this adaptation is an excellent introduction to one of Shakespeare’s classic plays and is suitable for all ages,” says Marcus Lundgren, Artistic Director of DuffleBag Theatre. “It works well for high school ages because it’s often on the curriculum, but also works well for younger audiences from Grade 4 and up as a great introduction to a famous story. Adults love the humor that often works on a different level from what the kids get. We are able to play to all the ages in the audience so it’s great when we get a mix of younger and older students as they all enjoy it on different levels.”

Since 1992, “the nearly world-famous” DuffleBag Theatre has wowed audiences of all ages in theatres, festivals and schools across the country with fun filled and hilarious performances. Each show starts with the DuffleBag actors who begin the retelling of original versions of select fairy tales and Shakespearean classics full of wit and humor. Just when the audience becomes enthralled by the story – a twist is created! Before your very eyes kids, moms, dads and even grandparents are asked to come up on stage and join in the action! This unpredictable performance is a hilarious experience for all ages and a truly unique interactive theatrical experience.

Tickets for DuffleBag Theatre’s improvisational Macbeth are $15 for adults and $12 for seniors and students. You can purchase tickets on our website: www.goodwilltheatre.net and click on “Events” or by calling the theatre Box Office at (607) 772-2404, ext. 301.