Eddie Brill Appears at the Firehouse on September 27! 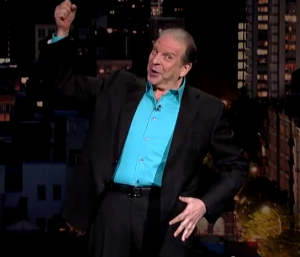 Eddie Brill on Saturday, September 27, 2014 at 7 PM.  Eddie Brill guarantees patrons a hot time in the Firehouse!
Eddie Brill is known for his stand-up comedy in the US and abroad.  He worked on “The Late Show with David Letterman” for seventeen years as the audience warm up and, for eleven years, the stand-up comedy talent coordinator.

Brill has taped more than 100 TV shows in six different countries, including ten appearances on the Late Show and an appearance on the FX hit series “Louie.” Eddie Brill was born in New York City, but raised in Hollywood, Florida. He originally intended to study math and science at MIT, however his stepfather’s death when he was just a junior in high school made him reconsider his life’s plans and he came to the conclusion that he should pursue a more creative career.

As a three-time MAC award winner for outstanding male comic in NYC, he has hosted and performed for hundreds of corporate events and on some of the greatest stages in the world.  He has been the audience warm up for many shows including the “Dana Carvey Show,” “Madigan Men,” “This is Your Life” and a few early episodes of “Saved by the Bell.”  He has appeared in numerous films as an actor and as a voice actor in several animated series’, including “Dr. Katz” and “Science Court.”

Brill is the creative director of the wildly successful “Great American Comedy Festival” that honors Johnny Carson in Norfolk, Nebraska as well as the Woodstock Comedy Festival in Woodstock, New York.

“Eddie Brill will be a great opening to our season,” said Naima Kradjian, CEO.  “For the last three seasons we have been able to bring in high quality comedy to the area and we are thrilled to begin our seventh season with such a high caliber comic.”

Brill, with Norman Lear, helped create one of the first college comedy writing departments at Emerson College in 1978, as well as the Emerson Comedy Workshop in 1976.  He currently teaches a highly acclaimed stand-up comedy workshop.

He also performs and helps raise money for The Roberto Clemente Foundation, Sisters in Survival, Juvenile Diabetes, and the American Cancer Association.

The Schorr Family Firehouse Stage is the first performance venue of the Goodwill Theatre Performing Arts Complex & Professional Training Facility.  It is located on the corner of Corliss Avenue and Willow Street in Johnson City. Patrons are advised to enter the facility through the parking lot on Corliss Avenue.

Parking is available in a small lot at the theatre, and a new lot along the side of the building, on-street, and in various Village municipal lots within two blocks of the theatre.