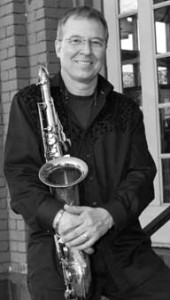 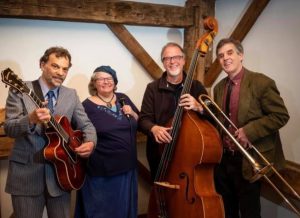 Party of Four is the result of combining four locally recognized jazz vocalists into a  group that celebrates the voice and 4-part jazz harmony. We specialize in vocal jazz arrangements of  well known and original tunes.  We are Cookie Coogan (Vocals/Piano), Dave Davies (Vocals/Guitar/ trombone), Doug Robinson (Vocals/Bass) and Wayne Gottlieb (Vocals/guitar)

Cookie Coogan is a vocalist/pianist/composer based in Ithaca, NY. Cookie is known for her strong voice, soulful, swinging style, creative improvisation, and excellent musicianship. She performs solo, leads her own bands, and appears with many different ensembles throughout the region. She directed the Ithaca College Vocal Jazz Ensemble from 1998-2010. She also directed jazz vocal groups at Cornell University, Syracuse University, and Ithaca’s CSMA.

Dave, who plays guitar and trombone, and sings with the group, is a force for Swing in the Ithaca community.  Currently, he’s part of several Ithaca bands, Djug Django, Lloyd’s Boys and The Opera Cowpokes to name a few.  In each venture, his keen ear for rhythm and harmony ensures a high degree of professionalism and danceability.  Party of Four features many of Dave’s 4 part vocal arrangements and inventive lyrics.

A science teacher by day, began singing and playing jazz 10 years ago after spending most of his adult life as a Doo-Wop singer.  He currently plays with The Pelotones and The Canaan Jazz Trio as well.  He writes and arranges many of Party of Four’s tunes.