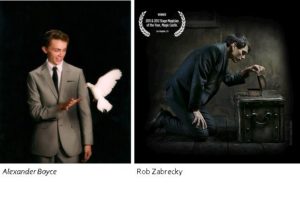 Alexander Boyce: Alexander Boyce’s performances have been called “elegant,” “fun,” and “astounding”. Kyle Chayka of The Verge stated he had the style of the “60’s-era. Classy.”  His performances are in demand at performing arts centers, banquets, colleges, theaters, corporations, home parties and everywhere in between. Alexander has worked his magic for top businesses and colleges such as the Dick’s Sporting Goods Open, Norfolk Marriott Waterside, and Bryn Mawr College (PA). His magic has even been seen on the “Today Show” on NBC. Alexander has won many awards in the magic community and he is the youngest regular performer in the 20 year history of Monday Night Magic, NYC’s longest running magic show. Alexander is currently a Drama student at NYU Tisch School of the Arts.

Rob Zabrecky: There’s simply no other magician like Rob Zabrecky. Through a wide range of artistic work that spans acting, magic, and music, Zabrecky has established himself globally as an original entertainer. In live performances he invents a magical world through a series of strange and beautiful effects which he combines with remarkable timing and sensational theatrical edifice. Like film director David Lynch, Zabrecky sets the stage for everyday life, then sets it on fire.

He is a three-time award winner at the Magic Castle in Hollywood, California. In 2014 he was voted “Parlour Magician of Year,” and in 2011 and 2012 he was voted “Stage Magician of the Year.” He can also be seen in Ryan Gosling’s directorial fantasy noir debut, “Lost River” portraying his magic persona at a fetish nightclub. Zabrecky’s career began as a musician while being the singer-songwriter and bassist for the Los Angeles group Possum Dixon, who released three albums on Interscope Records during the 1990s.

Sorry. This event has SOLD OUT.

The LOL Comedy Series is sponsored by: