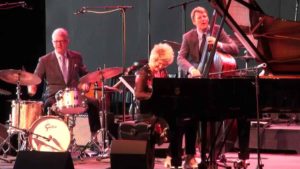 The Jazz Concert Series is sponsored by: 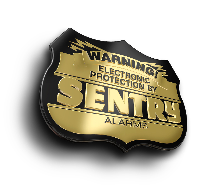 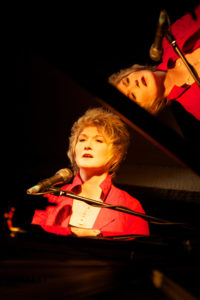 It’s no small accomplishment to be thought of as “The most creative and compelling singer-pianist since Shirley Horn”, but that’s exactly how Joel Siegel of the Washington City Paper described Dena DeRose. If she comes to your city and you want to catch the show, go early, because the room is going to be packed. She not only awes her audiences and music critics with her facility on the piano and her swinging, soothing vocal style but, as Richard Scheinin (San Jose Mercury) aptly put it, “… she exudes joy … what soul!”

As a recording artist, DeRose has 10 CDs as a leader to her credit, all of which have received superior accolades. Her newest, and second HighNote release ‘United’ features DeRose’s longtime rhythm section of Martin Wind and Matt Wilson with guests Ingrid Jensen on trumpet and Peter Bernstein on guitar. This CD hit the streets February 2016 and stayed on the radio playlists reporting to JazzWeek.com for nearly 8 months, has been featured on many radio stations in Europe, and has garnered many excellent reviews by Downbeat, JazzTimes, JazzHistoryOnline, All About Jazz, The New York Record, and many other international jazz publications such as JazzIt, Podium, JazzHot, etc.

All of DeRose’s recordings from Sharp Nine, Maxjazz, and now HighNote, have all received no less than 4 stars from Downbeat, she has continued to gain listeners around the globe, and has had many Grammy considerations for her work. Recently, her CD that had considerations was her previous HighNote recording “We Won’t Forget You…An Homage To Shirley Horn” featuring her trio of 17+ years (Martin Wind and Matt Wilson) with special guests Eric Alexander, Jeremy Pelt, and Gary Smulyan.

Astoundingly, Dena has also found time to hone her skills as a Jazz educator, and in the past was on the adjunct faculty at some the most prestigious jazz institutes, including Manhattan School of Music, NYU, The New School, Long Island University, Purchase College in New York, The Hartt School of Music in Connecticut, and was on the faculty for 10 years at “New York Comes To Groningen” Prince Claus Conservatoire of Music in Holland. Ms. DeRose is currently tenured as the Professor of Jazz Voice at the Jazz Institute of The University of Music and Performing Arts in Graz, Austria.

She frequently leads clinics and workshops at such prestigious schools and festivals such as the Stanford Jazz Workshop, Centrum-Port Townsend Jazz, the Dave Brubeck Institute in Oakland, CA, The Jazz School in Berkeley, CA, Taller de Musics in Barcelona-Spain, the JEN, NJPAC Jazz for Teen Program, The Litchfield Summer Jazz Camp, the Rotterdam Summer Jazz School, and The Royal Conservatory of Music in Den Haag, among others. She has served as a first round judge at the Thelonious Monk Vocal Competition and served 6 years on the NJ Star Ledger Scholarship Awards committee.

Christopher Louden of JazzTimes writes “…becalmed majesty escalating to vibrant exaltation…”, and Chris Hovan of All About Jazz writes “Over the course of the dozen albums she has recorded since landing in New York in 1991, DeRose has consistently proven herself as a singular pianist and vocalist with a depth of scope that is really something to hear.” The New York City Record’s Ken Dryden review of ‘United’ wrote “Dena DeRose has grown into one of the most acclaimed pianist/vocalists in jazz during her two decades-plus as a professional.” http://www.denaderose.com/index.php 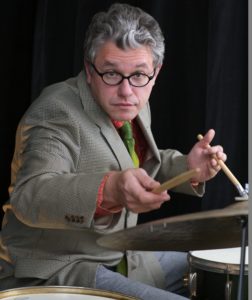 New York based drummer and Grammy nominee Matt Wilson is one of today’s most celebrated jazz artists. He is universally recognized for his musical and melodic drumming style as well as being a gifted composer, bandleader, producer, and teaching artist. Matt’s positive energy, sense of humor and ability to explore a broad range of musical settings keeps him in constant demand. In addition, Wilson’s dedication to jazz has helped establish him as a beloved world ambassador for the music, on and off the bandstand.

Recently, Matt performed at the White House as part of an all-star jazz group for a State Dinner concert hosted by President Obama. Other performers included Herbie Hancock, Dee Dee Bridgewater, Dianne Reeves, Chris Botti, Randy Brecker, Antonio Hart and James Genus. Matt was named the artist in residence at the Litchfield Jazz Festival where he conducted a much-heralded public interview with Dave Brubeck. In 2010, Wilson conducted over 250 outreach programs promoting jazz including an acclaimed Jazz for Young Peoples concert at Jazz at Lincoln Center.

Matt was featured on the covers of both Downbeat and JazzTimes magazines in November 2009 and was for 5 consecutive years voted #1 Rising Star Drummer in the Downbeat Critic’s Poll. The readers of JazzTimes recently chose him as one of the top 4 drummers in the 2010 Readers Poll. In 2003, he was voted Drummer of the Year by the Jazz Journalists Association. 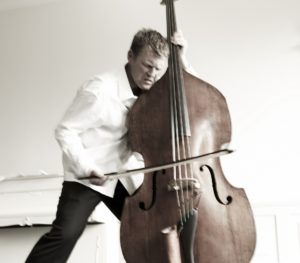 Bassist and composer Martin Wind was born in Flensburg, Germany in 1968 and moved to New York in 1996 to study at New York University (NYU) with a scholarship by the German Academic Exchange Service. In 1995 he earned himself a diploma as Orchestra Musician at the Music Conservatory in Cologne, Germany while studying with Prof. Wolfgang Guettler, former bassist with the Berlin Philharmonics. In 1998 he earned his Master’s degree in Jazz Performance and Composition studying with Mike Richmond, Jim McNeely, Tom Boras, Mike Holober and Kenny Werner.

Since his move to New York Martin has become a regular at all major jazz clubs and is also in demand as a session player; his credits include movies such as “The Alamo”, “Intolerable Cruelty”, ” Mona Lisa Smiles”, “Fur”, “True Grit” and “The Adventures of Walter Mitty”. In 1995 Martin came in third at the International Thelonious Monk Bass Competition in Washington, D.C. In 1996 Martin Wind won the first Cognac Hennessy/Blue Note Jazz Search in Germany with his trio “Dreikland” and got to record an album for Blue Note Records. In 2000 he was the first Jazz musician to win the Cultural Award of his home state Schleswig-Holstein.

Martin has released about 10 albums so far as leader/co-leader including his debut album “Gone with the Wind” (1993), “Tender Waves” (1996), “Dreiklang”(1997), “Family” (1999), “The Soccerball” (2002), “Salt & Pepper” (2007), “Get it?”(2009), “Theresia”(2010) and “MWQuartet – Live at JazzBaltica”(DVD). In 2014 Martin released the album “Turn out the Stars – music written or inspired by Bill Evans” on his newly founded “What if Music” Record Label. The recording features Martin’s current Quartet consisting of Scott Robinson (tenor sax), Bill Cunliffe (piano) and Joe La Barbera (drums), as well as the Italian “Orchestra Filarmonica Marchigiana” – Paquito D’Rivera called the album “disgustingly beautiful!”

Martin Wind is on the faculty at New York University and Hofstra University; he has taught at the National Youth Jazz Orchestra Germany and the Centrum, Stanford and Litchfield Jazz Camps among others. Martin was commissioned to write music for the American Place Theatre productions of Tim O’Brien’s “The things they carried”(2005) and Jeanette Walls’ “The Glass Castle” (2007). One of his arrangements appeared on the 2014 movie “Love is Strange” featuring John Lithgow and Tony Molina.