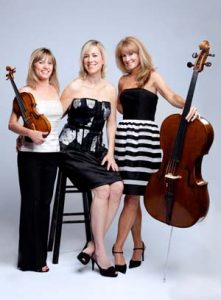 The most sought after trio in the world, the Grammy nominated Eroica Trio enraptures audiences with flawless technical virtuosity, irresistible enthusiasm and sensual elegance. The three women who make up this celebrated ensemble electrify the concert stage with their passionate performances. The New York Times writes, “There is an edge of the seat intensity to every note they produce“.

The Trio won the prestigious Naumburg Award, resulting in a highly successful Lincoln Center debut and has since toured the United States, Europe, Middle East, South America and Asia. While maintaining their demanding concert schedule, the Eroica Trio has released eight critically lauded recordings for Angel/EMI classics Records, garnering them multiple Grammy nominations. The first all female chamber ensemble to reach the top echelon of the field, the women of the Eroica Trio has shattered the age-old gender barrier, leading the vanguard and inspiring many to follow.

The unique history of the players of the Eroica Trio goes all the way back to childhood. Later, the Eroica Trio was formed at The Juilliard School. The Eroica Trio performs the Beethoven Triple Concerto more frequently than any other trio in the world, having appeared with renowned symphonies such as Chicago, St. Louis, San Francisco, Mostly Mozart Orchestra, Nashville, Indianapolis, Atlanta, Pittsburgh, Houston, New Jersey and Seattle.