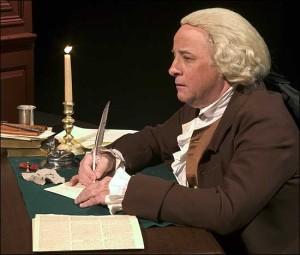 SAM GOODYEAR and THE MAN FROM MASSACHUSETTS

Sam Goodyear has been portraying John Adams since 1995 when he appeared in the premiere production of Howard Ginsberg’s Jefferson & Adams at Leatherstocking Theatre Company in Cooperstown, NY.

He has continued to perform in the play at various venues throughout the United States and appeared in a television adaptation on PBS, which was nominated for an Emmy in 2005.

The Man from Massachusetts grew in response to invitations to appear solo as Adams and has been performed in theaters, museums, historical societies, schools, universities, performing arts centers and at fund-raising events in 15 states.

Besides his career as an actor, Sam Goodyear is a musician, teacher of French, writer, and cartoonist. In addition, he is currently an announcer of classical music at WSKG Public Radio in Binghamton, NY.

A historical one-man show you don’t want to miss!

The Just 4 Fun! Series is sponsored by: