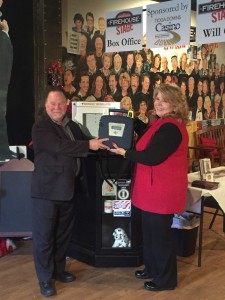 Recently, the Schorr Family Firehouse Stage received an Automated External Defibrillator (AED) from the John Mack Foundation. The AED has been installed in the hallway from the bar area into the lounge leading to the restrooms. In addition, several staff members were trained on the device.

John Mack was a 17-year old junior at Binghamton High School in New York State whose life tragically ended on November 30, 2006. During a club lacrosse game, John collapsed in full cardiac arrest after a stick check to his chest. It took 19 minutes to get a defibrillator to the field to restart John’s heart. John suffered irreparable brain damage and was removed from life support three days later and became an organ donor.

Following John’s death, a benefit was held by family and friends. The money raised was used to purchase 21 AEDs – 21 was the number John wore on his lacrosse jersey. A local lacrosse tournament was also renamed for John – The John Mack Southern Tier Shoot Out. It’s a 2-day tournament held each February in Binghamton, New York. A portion of the proceeds are donated to the John Mack Foundation to be used for AEDs and training.

Click here for a listing of some of the organizations the John Mack Foundation has helped.

“Cardiac arrest is a leading cause of death in the United States. Each year, emergency medical services (EMS) treat about 360,000 victims of cardiac arrest before they reach the hospital. Performing CPR (cardiopulmonary resuscitation) and using an AED (automated external defibrillator) before EMS arrives can increase the chance of survival upwards of 70%.

AEDs are electronic devices used to restart a person’s heart that has stopped beating. They are safe, easy to use, and can be operated effectively by the public. CPR can help restore blood flow to someone suffering cardiac arrest for a short time until advanced medical care arrives.

Cardiac arrest can happen to anyone at any time. It is important for organizations to implement AED programs so people are prepared to respond to a cardiac arrest emergency. Placing AEDs in key locations, and making sure organization members are trained to use them, can mean the difference between life and death. By learning CPR and learning how to use an AED in the event of a sudden cardiac arrest, one can take action if the need arises.”*

*From the John Mack Foundation site.

An AED costs about $1,500. We are very thankful for the John Mack Foundation’s help in securing a defibrillator for the Firehouse!