From Manhattan to Your Back Door! 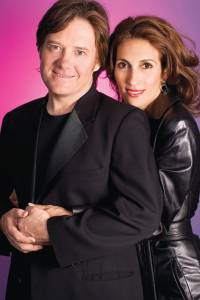 The breathtaking Eric Comstock and Barbara Fasano are performing their cabaret On The Sunny Side at the Schorr Family Firehouse Stage on Friday April 17th at 7pm. This remarkable performing couple have been reviewed as (“Exhilarating”) – The New York Times) has had audiences standing and cheering from coast to coast. Comstock and Fasano’s Cabaret is the last performance of the Songbook Series for the season and is sponsored by Mondorf & Fenwick.

Eric Comstock (pianist/singer/arranger) and Barbara Fasano (singer) are a New York-based musical duo, who performs the best of the classic pop and jazz songbooks. “EXHILARATING” — The New York Times

Eric Comstock and Barbara Fasano, whose electrifying combination of warmth, wit, swing and sensuality have made them the nightclub world’s most celebrated team, are every bit as entertaining as they are musically savvy. The multiple MAC, Bistro and New York Nightlife Award winners – they were honored with the 2013 MAC award for Major Duo Artists of the Year – are regular performers at New York’s most prestigious clubs and concert halls. They were among the last performers to headline at the Algonquin Hotel’s legendary Oak Room Supper Club. Their fast-paced and swinging exploration of the Big Apple HELLUVA TOWN: A NEW YORK SOUNDTRACK.

Although they’ve been compared to Nick and Nora, Fred and Ginger, and Lunt and Fontanne, the “golden couple’s” style is all their own, with a wide choice of material that brings the generations together. Whether the song is by Cole Porter or Paul Simon, Duke Ellington or Joni Mitchell, Comstock and Fasano make it fresh and new, and their audiences feel they’ve been to a terrific party where the music and the stories have been equally great.

Stephen Holden of The New York Times declares that “Mr. Comstock and Ms. Fasano are turning the neighborhood into a hotbed of pleasure.” Rex Reed of The New York Observer writes, “He is hip, daring, confident and dynamic. She gives off palpable electricity. If love is a wave, they’re riding the crest of it.” The New York Post’s Frank Scheck raves, “Their joint venture is a capital idea. When they sing together the evening is transformed from collaboration to alchemy.”

Comstock and Fasano have been honored as vocalists, recording artists, and writers of their numerous performance pieces. They received an unprecedented three MAC Awards in one year including Vocal Duo of the Year, Outstanding Female Vocalist and Record of the Year. Barbara’s award-winning Record of the Year, “Written In The Stars”, a Harold Arlen collection, is played on radio stations throughout the world, and has been praised in such diverse publications as JazzTimes and Playbill. Eric, the co-creator and star of the long-running Off-Broadway hit revue OUR SINATRA, recently released his fourth CD, “bitter/sweet”, an intimate guitar-vocal collaboration with guitar star Randy Napoleon.

Barbara and Eric also love to share what they’ve learned with students of all ages. They have an ongoing relationship with University of Michigan’s Theatre Department, conducting intensive master classes with the seniors. Their work with the Michael Feinstein Songbook Initiative took them to Los Angeles to work with gifted high school students. Their work as teachers includes private coaching, workshops and master classes in the art of performance and song interpretation.

Their many New York engagements include Carnegie Hall, The Allen Room and Dizzy’s Club Coca-Cola at Jazz at Lincoln Center, Merkin Hall, Symphony Space, New York Festival of Song, The Algonquin, Feinstein’s, The Carlyle, Birdland, Jazz at Kitano, and the 92nd Street Y’s ‘Lyrics and Lyricists’ series. Across the country, they headline at Caramoor, Cooperstown Music Festival, Arizona Jazz Festival, The Rrazz Room in San Francisco, Guild Hall in East Hampton, Sheldon Concert Hall and Jazz at The Bistro in St. Louis, Fairmont Copley Plaza in Boston, Prince Music Theatre in Philadelphia, The Colony Hotel in Palm Beach, and in jazz and cabaret clubs, music festivals and concert halls worldwide. This past summer, they made their London debut at Brasserie Zédel in Piccadilly and will return in 2014. In the words of jazz critic Ira Gitler, they “have it all, and then some … artistic, swinging, and superbly entertaining.”

“Masterful. They take it to a whole other level.” — The Wall Street Journal

Tickets for On The Sunny Side are $25 for adults and $20 for seniors and students. The Firehouse also offers a 20% discount to veterans and teachers; however, discounts cannot be combined. Tickets can be purchased online at: www.goodwilltheatre.net or by calling the Box Office at (607) 772-2404, ext. 301.