Arts organizations worldwide have something to celebrate. 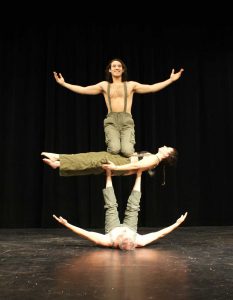 Ludwig van Beethoven has a big birthday coming up next year: 250. And the Goodwill Theatre Schorr Family Firehouse Stage is starting their celebration this September with a piece they commissioned from the world-renowned Binghamton-based dance company Galumpha. “Chez Victiore de Wellington” will have its world premiere at the Schorr Family Firehouse Stage at 7 p.m. Saturday, Sept. 28.

“We listened to lots of Beethoven,” Horowitz said. “We wanted to pick something that was not very well known, under the assumption that all the things that are so very well known, like the fifth symphony or the ninth symphony, and all these melodies that everybody knows, would probably come up in other Beethoven-themed programming.”

It was Galumpha performer Gil Young Choi who happened upon the piece the group would chose: Op. 91 “Wellington’s Victory” (a/k/a Battle of Vitoria or The Battle Symphony), a 15 minute piece Beethoven wrote to commemorate the Duke of Wellington’s victory over Joseph Bonaparte (Napoleon’s older brother. Wellington went on to defeat Napoleon himself at Waterloo).

“Wellington’s Victory,” it seems had the perfect combination of bombast and the familiar. “It’s got tons and tons and tons of cannon fire done mainly by the kettle drum,” Horowitz said. “and it’s also filled with very familiar themes.”

Much as Tchaikovsky did with French national anthem La Marseilleaise in his 1812 Overture (which despite its title was written in 1880) audiences will hear bits of  “God Save the Queen” (“My Country ‘Tis of Thee in the US), “Rule Britannia” and the French tune “Marlbrough s’en va-t-en guerre” which means Marlborough has left for the war a melody better known to anglophones as “For He’s a Jolly Good Fellow” or “The Bear Went Over the Mountain.” Beethoven fans will even recognize snippets that  appear in the composer’s later and better-known work, too.

As for the piece’s over-the-top qualities, audiences at the time loved it and it proved to be a big money-maker for Beethoven. The critics, however, were not as fond of the piece, leading to Beethoven’s legendary response.  To those who would criticize “Wellington’s Victory”, Beethoven famously said, “What I crap is better than anything you could ever think up.” Except he didn’t use the word ‘crap.’

So, armed with their excretory Beethoven, Galumpha got to work.

“What emerged was the craziest thing,” Horowitz said. “Gil and Jennie (Codis) and the company are playing a couple that come upon a restaurant and I am the waiter. We are calling the restaurant Chez Victoire Wellington and the dance is all about the meal that ensues. It comes in courses.”

Much as the piece itself does, with distinct breaks between segments. Those courses include plenty of props, too, including a very realistic prop lobster.

“The whole meal breaks into these acrobatic sequences and quirky lumps of choreography as I am serving them and as they are eating their food,” Horowitz said. “It’s really, really fun.”

The Schorr Family Firehouse Stage is located on the corner of Corliss Avenue and Willow Street in Johnson City. For more information, contact the Goodwill Theatre Box Office at (607) 772-2404, ext. 301, or visit goodwilltheatre.net or facebook.com/SchorrFamilyFirehouseStage