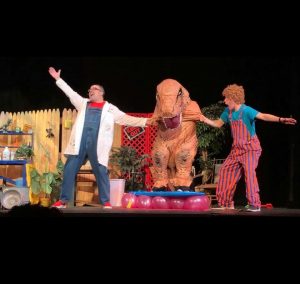 Beaker, who is, in fact Curt Strutz, has been in the ‘edutainment’ business for more than ten years but decided to make it his full-time career when things started looking not-so-bright for the mortgage business.

“I was a full-time wholesale rep for a mortgage company and I was a part time children’s entertainer on the side. Little shows on the weekend. But I could see the writing on the wall. You could see it coming,” Strutz said of the looming mortgage crisis.

“I quit my job doing that about two or three weeks before the market tanked. I took my part time hobby made it into a full time job and jumped ship right before the industry crashed and burned, so I got out at the right time.”

Now, if you were wondering how, exactly, the combination of rural America and science came about, Struts was in the right place at the right time for that, too.

“I was working at a county fair in the middle of Iowa and I was sharing the stage with a science show and a bluegrass band,” he said. “So I’d sit there doing my show and I’d watch the science guy go up there, and then he’d be done and the bluegrass band would kick off with their guitars and mandolins and I thought, it would just be really funny to have a hillbilly-themed science show.”

Strutz wasted no time putting his idea together.

“Before that fair was over I had sat down and written up a script, had all the ideas put together and within twelve months was running the show,” he said. “It was crazy how it came together and it’s taken off better than any show I have ever done before as far as kids entertainment goes. It’s been a hoot.”

Strutz still handles 100% of his shows, from sets and scripts to costumes and bookings. He said his latest educational creation, The Dino-Might Theories, has been a roaring success.

“The kids go nuts with the dinosaurs we have all new experiments different from the other show. More fun big stage things. We go over the different theories of how dinosaurs may have gone extinct,” he said. “So one of the primary theories is of a giant meteorite hitting the planet, there’s a theory about volcanic activity, there’s the Ice Age…  all these different theories, so we explore each one of those through different science experiments.”

Those experiments include a catapult to launch ‘meteorites’ across the stage, explosions with liquid nitrogen, high-shooting geyser volcanoes and, yes, tornadoes.

“We’re going to create two tornados on stage, a miniature one out of fire and a gigantic one out of toilet paper. All kinds of stuff. It’s crazy,” he said. “It’s non-stop, fast-paced, high-energy and character-driven, with music in the background. It’s not just a science teacher, it’s a production.”

“The parents have just as much fun,” he said.

Sponsored by NYSEG, Tickets for The Hillbilly Silly Science Spectacular: The Dino-Might Theories $10 for adults and $8 for kids/students/seniors, and can be purchased online at goodwilltheatre.net or by calling the Box Office at: (607) 772-2404, ext. 301.