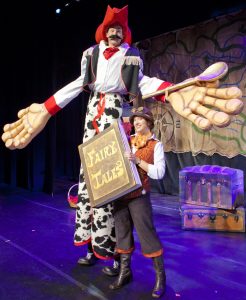 Crossover fairy tales are nothing new. From “Into the Woods” to “Shrek” there’s something about seeing the familiar characters we grew up with interacting with each other. But Page Turner Adventures fresh twist on a classic idea includes the most important character of all: the audience. You can be part of Page Turner Adventures’ Mixed Up Fairy Tale at 11AM and 2PM on Saturday, November 3  at the Schorr Family Firehouse Stage in Johnson City.

“It is an original fractured fairy tale that we wrote. We do supersized stories so we’re not doing a play,” said Riley Roam, who plays Page Turner, narrator storyologist at large.  “What we’re doing is an interactive story where the entire audience becomes the main character in the story, so they are standing up, sitting down, running in place, interacting directly with the characters helping us solve the problems and figure out what to do. They’re not sitting. We never have an issue with that. We never have cranky kids that want to go, because they are involved the entire time. They’re not just sitting quietly. It’s a ton of fun.”

Together with her husband, Kenny Mikey, Roam has created a tale in which the sleeping spell on Sleeping Beauty (played by Mikey) can be broken only by finding a few things around Storyville, like, oh, say a red cape with a hood and some wolf fur (now, wherever could one find such things).

Roam is an Emmy Award winning writer, producer, and host for FOX Kids for six years. She’s also written, produced, and hosted segments for the Travel Channel, Scholastic, The International Reading Association, The Collaborative Summer Reading Program, and PBS. Kenny is an award-winning video producer, director, and editor, and he has one other special credential: he graduated from Clown College. No, really. He did. And he joined the Ringling Brothers Circus as a clown.

“It’s circus and storytelling combined,” Roam said.  “There is a ton of humor. That’s something that people tell us all the time.” Something Roam does not subscribe to, however, is the idea that humor has to be off-color or risqué to appeal to adults. She said she feels kids ‘get’ a lot more than we may think they do.

“The adults always say, ‘I laughed so hard, I was not expecting to have so much fun,’” she said. “So the kids are getting it on one level and the adults are enjoying it, too.”

Roam said doing these shows absolutely never gets old. Not even close.

“I love when the kids are absolutely with me. I can see it in their faces when they are imagining a beanstalk and they’re climbing the beanstalk and they’re in the clouds,” she said.  “It thrills me and I have been doing this for years and we have done this show a thousand times and every time I still get chills when they are totally with me and their imaginations are turned on.”

As for the kids’ favorite part?

“The giant,” Roam says with a laugh, describing the ten-foot tall cowboy giant with huge hands, played by her husband. “That’s our signature character that we are known for.”

Roam is happy to share the limelight. The Giant steals the show faster than you can say ‘beanstalk.’

“I am out there the whole time doing all of this stuff,” she said with a chuckle. “And then all they remember is the giant when he comes out.”