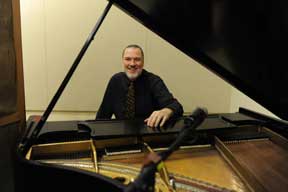 Jon Weber, host of NPRs Piano Jazz program, will perform his evolution of Jazz show Joplin to Jarrett at the Schorr Family Firehouse Stage on Sunday, November 24 at 2 PM. The Goodwill Theatre’s 2013-2014 Music Hall Series is sponsored by the Doubletree Hotel.

Joplin to Jarrett will trace the progression of Jazz piano through eleven decades, illustrating the influences of one artist on another through Weber’s expert narration and masterful musicianship.

Weber has toured all over the world and received numerous honors for performance and composition. Gary Burton, Roy Hargrove, Eric Alexander, Niels-Henning Ørsted Pedersen, and Avishai Cohen have all recorded Weber’s music. He’s recorded in Denmark, Switzerland, India, Australia & the USA, performing with distinction as a sideman to Benny Golson, David “Fathead” Newman, Clark Terry and many more. Weber has performed to a sold-out Carnegie Hall six times and scored extensively for television since 1987.

“Jon was here earlier this season with Kathy Kosin’s To the Ladies of Cool, and he is in Lauren Fox’s show Canyon Folkies,” says Naima Kradjian, Goodwill Theatre CEO. “We are very fortunate to have such a dynamic and knowledgeable musician in our midst three times this year. You will not want to miss his solo show.”

Tickets for Joplin to Jarrett are $25 for adults and $20 for seniors and students. You can purchase tickets on their website: www.goodwilltheatre.net or by calling the theatre Box Office at (607) 772-2404, ext. 301.

The Schorr Family Firehouse Stage is the first performance venue of the Goodwill Theatre Performing Arts Complex & Professional Training Facility. It is located on the corner of Corliss Avenue and Willow Street in Johnson City. Patrons are advised to enter the facility through the parking lot on Corliss Avenue. Parking is available in a small lot at the theatre, and a new lot along the side of the building, on-street, and in various Village municipal lots within two blocks of the theatre. For more information, interested persons can contact the Goodwill Theatre Box Office at (607) 772-2404, ext. 301, or visit: www.goodwilltheatre.net