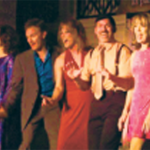 “Sometimes you’re happy and sometimes you’re sad – but the world goes ‘round.” Life (with its glories, indignities, hopes and quiet dreams) is the subject of this stunning revue of the beloved songs of JOHN KANDER and FRED EBB. The vast range of human experience is explored in song after impeccable song by one of Broadway’s most daring and successful teams and masters of the heart-grabbing Broadway showstopper. This glittering revue features unforgettable gems from throughout their incredible career in theatre, film and television, spotlighting songs from Cabaret, Chicago, Kiss of the Spiderwoman, New York, New York, Funny Lady and more. Filled with humor, romance, drama, nonstop melody and brassy, insightful lyrics, AN EVENING WITH KANDER & EBB is a thrilling celebration of life and the fighting spirit that keeps us all going.

Kander and Ebb were a highly successful songwriting team known primarily for their stage musicals, yet were also known for scoring several movies including their most famous song, the theme song from Martin Scorsese’s New York, New York. Recorded by many artists, “New York, New York” became a signature song for Frank Sinatra. Kander’s and Ebb’s greatest acclaim came from the musical Cabaret (1966) and the 1972 film version. The musical, directed by frequent collaborator Harold Prince, was a major success, with a Broadway run of over 1,100 performances. It won a Tony Award as the season’s best musical, and its original cast recording won a Grammy Award. The film, directed by Bob Fosse, won eight Academy Awards. The musical Chicago (1975) after an excellent initial run of 936 performances was revived on Broadway in 1996 to become an even greater hit. It has become the longest-running revival in Broadway history, and the 2002 film version was also a great success, including an Oscar nomination for the collaboration. Other Broadway successes included Woman Of The Year (1981), Kiss of the Spider Woman (1992), and, posthumously for Ebb, Curtains (2006).