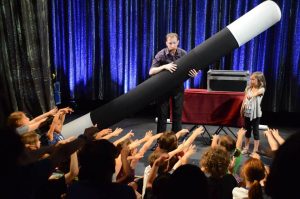 The Schorr Family Firehouse Stage has a magical leap day planned as It’s Magic with John Reid returns by popular demand for three separate events: a children’s balloon workshop at 11 a.m., a magic show at 2 p.m. and a balloon workshop for adults at 5 p.m., on Saturday, February 29.

Reid’s magic show is 50 minutes of interactive magic comedy for the entire family with some feel-good messages along the way.

“I talk about sharing, about being respectful and working as team and all that,” he said. “But it’s sort of camouflaged with really bad dad jokes.”

During the show Reid will bring as many as eight children to the stage to assist him, but he says it is the big ending everybody remembers best.

“I levitate one of the kids. I take a digital photo and I print it out because they can’t see themselves floating,” he said. “I mean in today’s day and age everybody’s got an iphone or a video camera, but usually at the point where a kid is floating the parent’s jaw drops and they forget to take the photo. This way the kids can see themselves floating.”

It is also his favorite part if the show.

“As far as they know, nothing is happening. They are just lying there and everybody is using their imaginations. They don’t get it,” he said. “And then all of a sudden, when they see the photo of themselves floating and their eyes fall out of their head; that’s my favorite part.”

Reid started out by dabbling in magic as a child, developing his talents, but keeping them to himself until one day he was outed as a magician in college.

“Next thing you know I was doing kids birthday parties and doing children’s birthday parties put me through school. I finished college and I looked around at my friends and I realized I was making more money than my parents were, I was partying on the weekends and I had zero student debt,” he said. “I thought, maybe I should just go with this instead of some entry-level position at a soul-crushing job that’s going to make me wake up every morning hating my life. Let’s try this for a year or two.”

That was 25 years ago and Reid hasn’t looked back. His expertise with balloons has led him to a world record for the world’s largest balloon sculpture by an individual. Reid’s 55-foot tall sculpture, Poptimus Prime, was crafted from 4,302 balloons, so he can most likely teach anybody how to make a giraffe and much, much more. But perhaps the real magic is what happens to the adults who attend his workshop to make balloon hats, animals, flowers, swords and other flights of inflated fancy.

“It’s cool for kids, but it’s even cooler for adults because now the grandparents become the cool grandparents because they know how to make balloons,” he said. “The adult classes are usually more fun than the kids classes because you watch people in the 40s and 50s become six-year-olds, and they start sword fighting with the balloons and it’s one of my favorite things.”

And while Reid’s show is for kids, it means a lot to him that their grown-ups go, too. “You get a lot of parents who say, well, magic isn’t real, and you know what? It’s not. But you spending time with your kids IS. I want to make sure you guys have a good time together.”

And that’s probably the most magical thing of all.