This October, the Schorr Family Firehouse Stage will celebrate its tenth season with several special events, the first of which will commemo  classical piano concerts at the Firehouse Stage, on October 14, 2017 at 4:00 p.m.

The special anniversary tribute concert will feature special guest musicians from the past ten years of classical piano performances, with a finale by the Maestro himself, and a post-show reception with hors d’oeuvre and canapes. Tickets are $35 for adults and $30 for senior citizens and students, and can be purchased online at goodwilltheatre.net or by calling the Box Office at: (607) 772-2404, ext. 301.

“It seemed only fitting to celebrate George F. Johnson’s 160th birthday the same way,” said Naima Kradjian, Goodwill Theatre CEO. “The Maestro has been a fixture of this community and one of our audience’s favorite performers. This concert pays tribute to John Covelli’s career, particularly his performances at the Firehouse Stage over the past decade.”

Covelli will be joined by seven musicians who have performed with him at the Firehouse Stage over the past ten years, including Hakan Hromek, cello; April Lucas, saxophone; Steve Nanni, tenor; Tim Perry, clarinet; Pej Reitz, piano; Jeanne Sperber, flute; and Nina Stutzman, flute. 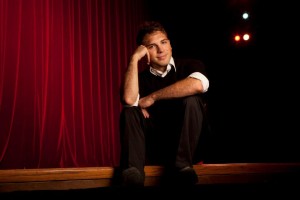 The concert will feature classical compositions by Chopin and Rachmaninoff, as well as newer compositions by Leonard Bernstein, Cecile Chaminade, and Darius Milhaud. The Master of Ceremonies will be composer Santino DeAngelo.

“We are so grateful and humbled at how enthusiastically our project has been embraced by this community,” said Kradjian. “Our tenth anniversary season is going to feature some of the most beloved performers from the past ten years, including the Mason Warrington Orchestra, magician Alex Boyce, and chanteuse Marissa Mulder, as well as shows making their Firehouse debut, like Late Night Catechism, Broadway’s Next Hit Holiday Musical and Hypno Hype.”

“If you’ve enjoyed our shows over the last ten years, you’ll be blown away by the next ten,” Kradjian added.

conductor of the Binghamton Philharmonic. A Chicago native, Covelli began playing for audiences at the age of four, and was credited in his youth with numerous concerts, broadcast recitals and special musical awards. He performed at the Chicago Music Festival with the Chicago Symphony at age nine. As a teenager, he was the only concert pianist ever to win the famous Godfrey Talent Scout Program, and he appeared in a series of nationwide CBS TV performances. His New York debut drew rave reviews, including one from The New York Times, which claimed, “This is one of the best debut recitals in our recollection.” While conductor and soloist of the Seventh Army Symphony, he was selected as a musical ambassador for USIS, touring throughout Europe.