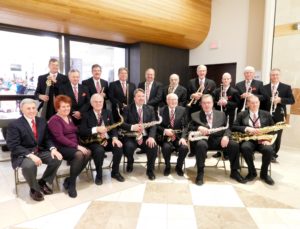 On Sunday, November 11 at 2PM The Schorr Family Firehouse Stage is planning a tribute to World War II with the Mason Warrington Orchestra returning once again to play the hits of that bygone era. But sometimes you have to be high tech to harken back to the past. That’s what Mason Warrington Musical Director and saxophonist Hank Slechta discovered while coming up with a show that would equal or surpass last year’s success.

“Last year it was a packed house and it was the best show we’ve ever done there. It was very well received,” Slechta said. “Thanks to the magic of the Internet, I came up with enough material [for this year’s show] without repeating anything from last year for another tribute to WWII.”

The 15-piece orchestra with two vocalists, whose members range in age from 28 to 80, will transport audiences back to a turning point in the history of the world, this nation and popular music.

“[World War II] was the Big Band era, sort of toward the end of it. At that point there were 600 bands traveling the country all in cars or on buses,” Slechta said. “Musicians getting drafted and traveling being made difficult because of rationing … WWII just kind of put an end to that and the singers then took over. The singers became the big thing and the band was just there to back them up.”

Slechta said the audience can look forward to such hits as The Andrews Sisters’ Rum & Coca-Cola and Glenn Miller’s Jeep Jockey Jump as well as GI Jive and Bell Bottom Trousers and many more.

And while Slechta was just a small boy when the big band era was wrapping up, it’s music has stayed with him.

“I’ve been director [of the Mason Warrington Orchestra big band] for 25 years,” he said. “Hard to believe, but time flies when you’re having fun.”