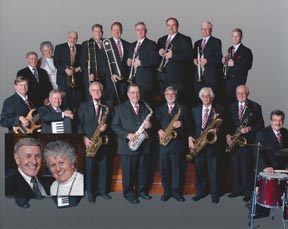 As part of the Just 4 Fun! Series, The Goodwill Theatre will celebrate spring with a Sunday afternoon of Swing and Big Band music performed by the Mason Warrington Orchestra on Sunday, April 7, at 2 p.m. at the Schorr Family Firehouse Stage. The Just 4 Fun! Series is sponsored by Visions Federal Credit Union.

Anyone who loves the Big Band sound will love the Mason Warrington Orchestra. The orchestra’s repertoire includes authentic arrangements from the books of Count Basie, Les Brown, Benny Goodman, Glenn Miller, Tommy Dorsey, Stan Kenton and many other bands, both past and present. The band’s two featured vocalists, Judy Giblin and Ralph Muro, recreate the sophisticated styles of such legendary singers as Frank Sinatra, Ella Fitzgerald, Bobby Darin and Peggy Lee.

“Our audiences love the Mason Warrington Orchestra with Judy and Ralph. It is simply a delightful way to spend a Sunday,” says CEO Naima Kradjian. “While this is primarily a concert format, we had a few requests to add a side dance floors we will give that a try this year.”

Ralph Muro has been a featured vocalist with the Mason Warrington Orchestra for seven years. Prior to that, he sang with the Jazz Exchange, which was once the house Big Band for Glen Gardner’s Music Box Jazz Club in Johnson City.

Tickets are $20 for adults and $15 for senior citizens and students. You can purchase tickets online at www.goodwilltheatre.net or by calling the Box Office at (607) 772-2404, ext. 301. Tickets, if still available, will also be sold at the door, one hour before show time.