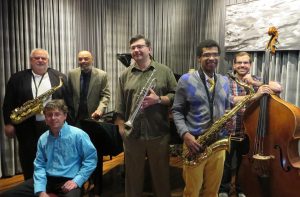 Goodwill Theatre will offer a tribute to the music of jazz legend Miles Davis on Sunday, April 28 at 2pm, performed by Bobby Militello and Star People.

Bobby Militello has played with many artists for the last 5 decades, along with leading his own groups, the Bobby Militello Quartet, and the sextet Star People. He toured for twenty years and recorded over 20 CDs with the Dave Brubeck Quartet, and appeared in many international jazz festivals, television and radio shows. He played for four years with Maynard Ferguson, and appeared in the “Downbeat” Readers Polls from 1976 to 1979. He received critical acclaim in numerous articles and reviews throughout the United States and Canada. While living in Los Angeles from 1983 to 1991, Bobby worked with many world-renowned composers and arrangers, including the Don Menza Quintet, the Dee Barton Big Band, Chuck Flores Big Band and Quartet, Steve Hoffstetter Latin Big Band, the Jeff Stradling Fusion Quintet, The Kim Richmond Jazz Orchestra and Big Band, and the Steve Segal Big Band.

John Bacon, composer and percussionist, is a member of some of the most prominent Jazz groups in Western New York including Star People, the Bobby Militello Quartet, the Buffalo Jazz Octet, the UB Faculty Jazz Quartet and the Buffalo Jazz Composers Workshop. He is a music educator at UB, Villa Maria College and SUNY Fredonia. He has been honored as a composer through the New York State Foundation for the Arts (2013 Artist Fellow) and the New York State Council on the Arts (Individual Artist Composer Commission). He is the curator of the region-wide jazz initiative “JAZZ IMPRESSIONS: 1968”. For more: johnbaconjr.com

Andy Weinzler has been performing professionally as a saxophonist, jazz soloist and woodwind doubler for over 30 years. He founded ‘Transformation Recording Studio’ in 2007. As a performer, he has been a featured soloist with the Gap Mangione Big Band since 1991, having recorded 3 CDs including ‘Planet Gap’ (1997), ‘Stolen Moments’ (2002) and ‘Family Holiday’ (2004). These recordings feature world-class musicians including Steve Gadd, Tony Levin, John Patitucci, Grant Geissman and fellow saxophonists Pat LaBarbera and Gerry Niewood. For more information, visit: andyweinzler.com

Miles Davis was an American jazz trumpeter, bandleader, and composer. He is among the most influential and acclaimed figures in the history of jazz and 20th century music. Davis adopted a variety of musical directions in a five-decade career that kept him at the forefront of many major stylistic developments in jazz. Davis won eight Grammy Awards and received thirty-two nominations.

The Schorr Family Firehouse Stage is located on the corner of Corliss Avenue and Willow Street in Johnson City. For more information, contact the Goodwill Theatre Box Office at (607) 772-2404, ext. 301, or visit: goodwilltheatre.net or facebook.com/firehouse.stage