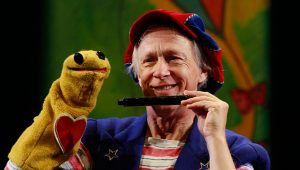 Robert Morgan’s children’s show is called Morgan’s Journey and the name has never been more fitting. As the longest-running touring play in Canadian history, it is a journey that has taken Morgan around the world for almost 40 years and will bring him to the Schorr Family Firehouse Stage for two performances, 11 a.m. and 2 p.m., on February 16.

Atypical as it may seem, Morgan’s Journey, about his travels with a sock puppet, has spent most of its time in Morgan’s mind.   “A script has not existed until a few years ago when I decided to write something down,” he said. “There’s a very clear story; the narrative hasn’t really changed in 40 years, but how I get their changes because it’s so interactive. The audience are participants.”

In fact, one of the few changes Morgan has made was brought about by audience participation.  Morgan used to start his show from inside a colorful sack on stage, emblazoned with a sign that read, “ Inside this bag is a clown who has been waiting a long time to be born” (don’t worry coulrophobes – clowns and all references to them have since been removed).

“About ten or 15 years ago the first thing I heard when I came out of the bag was, ‘Oh! He’s OLD!’” Morgan said with a laugh, adding that he went completely gray when his daughters were teenagers. “So now it reads ‘an old man”.

Aside from those changes, the show remains beloved by generations (Morgan remembers fondly when after a show in Hong Kong a woman approached him in tears, saying she has seen his show in Toronto when SHE was a girl and had brought her own daughter) and also remains refreshingly free of flash.

“When I started this show, I used to unicycle and juggle under this mistaken notion that you really have to wow with pizzazz and jazz. But over the years it has become simple and simpler and simpler. The less I do, the better the play is, the better the story is. There is a very clear narrative,” Morgan said.

“I haven’t had to change the basic elements of the play that are based on a child’s extraordinary ability to focus and be engaged. I am opposite the kind of wow, jazz flash gotta keep moving [show].”

Morgan also takes his audience interaction seriously. There’s no fourth wall convention in his shows.  “[Children] don’t know that wall, they don’t care about it anyway and I don’t like it,” he said. And though Morgan’s Journey is great fun, it has a very important mission.

“The power of the imagination is often what’s overlooked in the education system and it’s what’s going to save the planet, ultimately,” Morgan said. “It’s that engaged imagination that’s our future. Humanity’s future.”