“My Mouth is a Volcano” musical for kids

Goodwill Theatre, Inc. is expanding its children’s programming at the Schorr 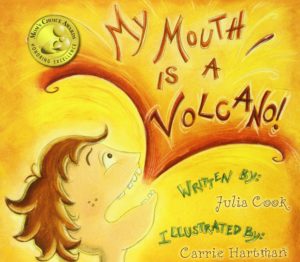 Family Firehouse Stage for its tenth season, by offering ten performances for children and their families.

The first children’s show of the 2017-2018 season will be Stars Within Reach Productions’ “My Mouth is a Volcano”, a one-hour musical based on the award-winning children’s book by Julia Cook, on Saturday, October 28 at 11am and 2pm.

The show teaches children the value of respecting others by listening, and waiting for their turn to speak. The main character, Louis, is always interrupting people. All of his thoughts are very important to him, and when he has something to say, he “erupts”. But when others begin to interrupt Louis, he learns how to respectfully wait for his turn to talk.

“Bringing a child to the theatre for the first time can be nerve-wracking for parents,” said Naima Kradjian, Goodwill Theatre CEO. “They want to introduce their kids to live performance, but they worry the show won’t hold their child’s attention, or that their child will be disruptive. We try to make it easy for parents, by offering shows that are engaging for children, and relatively short, and by providing a free craft activity for children at every performance.”

“The shows do come with an age recommendation, but that is just a guideline, and all ages are welcome,” Kradjian continued. “Good quality children’s shows can be enjoyed by parents, too.”

Julia Cook is a national award-winning children’s author, parenting expert and inspirational speaker. A former school counselor and teacher, she was searching for an effective story to teach children about the differences between tattling and telling. When she couldn’t find the right resource, she decided to write her own book, “A Bad Case of Tattle Tongue”. Nine years later, she had published 76 books from the National Center for Youth Issues, Boys Town Press and the CDC. Her work has been endorsed by the National Center for Missing and Exploited Children, Safe and Sound, Childwatch of North America, the Center for Disease Control, Childhelp, Darkness to Light, and many others.

Other children’s performances this season include the Hillbilly Silly Science Spectacular on November 18, TriCities Opera’s Jack and the Beanstalk on February 10, Hudson Vagabond Puppets’ Caps for Sale & Three Billy Goats Gruff on March 24, and ArtsPower’s Nugget and Fang on May 12.