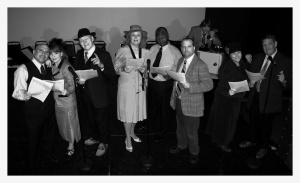 Step into the past for an afternoon with a Patriotic Radio Show performed by Southern Tier Actors Read (S.T.A.R.) at the Schorr Family Firehouse Stage  on Sunday, November 9, 2014 at 2 PM.  This unique performance is sponsored by IBM.

The Patriotic Radio Show is set during World War II.  During the war, radio programs were popular entertainment to the men and women fighting abroad and those still at home, featuring favorite entertainers singing and performing comedic sketches.  Directors Judy McMahon and Kate Murray have delved into radio archives to recreate these pieces that often showcased the talents of Fred Allen, Bob Hope, Groucho Marx, Jack Benny, and the songs sung by Ginny Simms, Kenny Baker, and The Meadowlarks. This performance will present a behind the scenes look at the production of these radio programs, including specially created sound effects.

“We’re excited to work with S.T.A.R. and try something new,” said Naima Kradjian, CEO.  “I think everyone will really enjoy a visualization of radio productions from years past.”

S.T.A.R. began in 2010 in the west side living room of founder Judy McMahon, along with co-founder Heidi Weeks and 17 local actors.  They gathered to read aloud to one another classic and contemporary dramatic works which, for reasons of cast size, expense, time period or subject matter are not likely to be produced locally. The group soon expanded its mission to include public staged readings at venues around the region.

Tickets for the STAR Patiotic Radio Show are $20 for adults, $16 for seniors and students. The Firehouse also offers a 20% discount to veterans and teachers; however, discounts cannot be combined. Tickets can be purchased online at: www.goodwilltheatre.net or by calling the Box Office at (607) 772-2404, ext. 301.