Scared Skinny at the Firehouse! 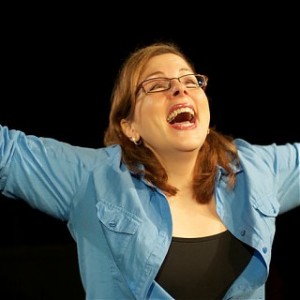 The Goodwill Theatre will present “Scared Skinny – A One (hundred pound lighter) Woman Show” by Mary Dimino on Friday, November 21 at 7:00 PM, at the Schorr Family Firehouse Stage. The Goodwill Theatre’s 2014-2015 Let’s Talk About It series is sponsored by Sentry Alarms.

In Scared Skinny, stand-up comedian Mary Dimino paints a picture of what it was like to grow up “flabby, funny and afraid” in her Italian-American family.  Dimino chronicles her colorful Queens childhood and her quest to lose 115 pounds.  The show recalls frank and funny tales of “fat kids playing with Ouija boards” and being bigger than Santa in a holiday picture.

“This show is part of our new Let’s Talk About It Series, geared toward tough issues and how we deal with them,” said Naima Kradjian, Goodwill Theatre CEO. “There are a lot of situations that are often unique to women, weight and healthy lifestyles, as well as childhood influences and family interactions.  All of these things can be dealt with humor, so we can laugh about it and then talk about it.”

Dimino, winner of the 2010 MAC Award for Outstanding Female Comedian, is a bundle of hilarious contradictions; with an angelic smile and a tough, New York-Italian attitude, she tells it like it is. Her sweet face coupled with her energetic delivery makes Dimino a favorite with comedy club audiences. You may have seen her on Comedy Central, VH-1, HBO’s Chris Rock Show, NBC’s Today Show, sketches on Late Show with David Letterman, Late Night with Conan O’Brien, interstitial stand-up for American Movie Classics Network, and in dozens of national commercials. Her stand-up was featured on Comedy Central’s SAST and she is the series studio warm-up act for The Graham Norton Effect, also on Comedy Central. She performs in clubs nationwide and was featured in The New York Underground Comedy Festival, Toyota Comedy Festival, Staten Island Comedy Festival, The Italian Chicks Comedy Tour and Ladies of Laughter. Dimino is winner of the 2008 Gracie Allen Award presented by American Women in Radio and Television. The Gracie honors exemplary contributions of individuals who have encouraged the realistic and faceted portrayals of women in entertainment, commercials and featured programming. In theaters, Dimino plays Connie the Maid of Honor in Tony and Tina’s Wedding, Polly on New York Undercover and appears in various other television and film roles. Dimino is a contributing writer for various shows, including the award-winning PBS documentary “Fat”, in which she also had a starring role.

Due to the sensitive subject matter and adult themes, this show is 18+.

Tickets for Scared Skinny are $20 for adults, $18 for seniors and students. The Firehouse also offers a 20% discount to veterans and teachers; however, discounts cannot be combined. Tickets can be purchased online at: www.goodwilltheatre.net or by calling the Box Office at (607) 772-2404, ext. 301.