Sheila the Great returns to the Firehouse! 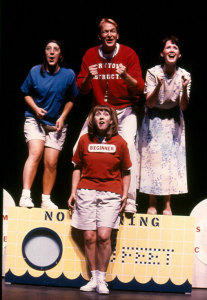 As part of our Story Time Theatre Series, The Goodwill Theatre will present Otherwise Known as Sheila the Great for two shows on Saturday, November 22 at 11:00 AM and at 2:00 PM, at the Schorr Family Firehouse Stage. This event was previously scheduled for November 8, 2014.  The Goodwill Theatre’s 2014-2015 Story Time Theatre Series, is sponsored by Senator Libous’ BOOKS Program, in partnership with Morrisville State College.

Children and adults will fall in love with Sheila and her friends as she learns, to her dismay, that her trials and tribulations are essential to growing up. With humor, cool music, and just the right amount of youthful persistence, ArtsPower’s Otherwise Known As Sheila the Great will inspire audiences of all ages as Sheila learns that the rites of passage can pass right by without too much bother. The story first attracted ArtsPower’s attention both because of its unusual protagonist (who, as a matter of fact, is a portrait of Ms. Blume herself at a young age) and because they appreciated its unaffected and honest treatment of children’s issues.

As with many ArtsPower productions, Sheila the Great is a story of discovery; the heroine is constantly searching for a place where she belongs.  In the end, she realizes that her family has always accepted her just as she is.  Furthermore, with her newfound honesty and self-confidence, she can begin to conquer her fears and learn to accept herself.  “We are very proud to be able to present this show, and we believe that it will charm anyone who is a child or has ever been one.” says Naima Kradjian CEO of Goodwill Theatre.

Otherwise Known as Sheila the Great is ArtsPower’s first adaptation of a book written by a still-living author.  Judy Blume, who since 1981 has been one of America’s most celebrated authors of bestselling works for children and adults, was most gracious in responding to their request to turn her book into a musical stage play.

Ms. Blume consented to work with playwright Greg Gunning on creating the script. “Judy has an uncanny knack for capturing the rhythm and tone of children’s speech, and with her help the play’s dialogue became wonderfully funny and authentic.” says Gunning, who used the original story as a starting point, kept some of the novel’s characters and problems, but also made some changes.

“Producing this show has been a tremendous experience,” says Mark Blackman, who founded ArtsPower in 1985 with his twin brother Gary in Manhattan.  “Working with Judy and our writing team of Gunning and DeRosa has resulted in a musical that is highly entertaining but also portrays valuable lessons for everyone about what is really important in our lives, like family and overcoming our own fears.” Since ArtsPower’s beginnings, Mark and Gary Blackman have been steering its course ever since as it has emerged as one of America’s premiere producers of professional theatre for young and family audiences. Its 27 professional touring productions have been seen by nearly 12 million people in 48 states – from Alaska to Florida – in some of the nation’s top cultural centers, including The Kennedy Center in Washington, DC and Lincoln Center in New York.

Tickets for Otherwise Known as Sheila the Great are $10 for adults, $8 for seniors and students. The Firehouse also offers a 20% discount to veterans and teachers; however, discounts cannot be combined. Tickets can be purchased online at: www.goodwilltheatre.net or by calling the Box Office at (607) 772-2404, ext. 301.