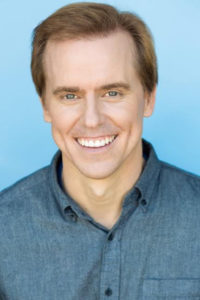 Patrick O’Sullivan, recurring character on ABC’s “Dr. Ken” and “The Neighbors”, will perform at the Schorr Family Firehouse Stage in Johnson City on Friday, November 17 at 7pm. His standup comedy features stories about his childhood as the son of Irish immigrants, outrageous tales of dating in the technology generation gap, and hilarious impressions.

“Patrick performed his one-man show ‘Young Sully’ at our venue a few years ago and it was greatly enjoyed by everyone who attended,” said Naima Kradjian, Goodwill Theatre CEO. “He’s had a very successful years since then, and we’re happy to be bringing him back to perform his hilarious standup comedy.”

Patrick O’Sullivan recurred for 2 seasons as Dr. O’Sullivan on Ken Jeong’s ABC sitcom “Dr. Ken”, and before that as Alien Johnny Unitas on ABC’s “The Neighbors”. He appeared in the YouTube Red movie “The Thinning”, and the Netflix film “Internet Famous”. Other recent appearances include FOX’s “Grandfathered”, Adult Swim’s “Hot Package”, ABC’s “Happy Endings” and Comedy Central’s “Free Radio”, and BET’s “Beauty and the Baller”. As a standup comedian, O’Sullivan has headlined clubs in Seattle, San Francisco, Calgary, San Diego and Sacramento. He produced a documentary on Lenny Bruce (“Looking for Lenny”) which was ranked by IFC as #1 on their “10 Great Documentaries about Comedians” list. Patrick has also been a part of some of L.A.’s most unique stage productions; playing Gary Busey in “Point Break Live!” and creating the hit impersonator stage shows “All About (Christopher) Walken” and “All About Jack (Nicholson)”. His one man show “Young Sully: Stories from an Irish American Youth” started in L.A. and was later chosen as S.F. Chronicle Pick of the Week and for the Out of Bounds Comedy Festival in Austin.

This performance is one of three comedy performances in the 2017-2018 season which are sponsored by Sentry Alarms, along with “Bam! It’s Magic!”, featuring Alex Boyce and Derek Hughes, on January 13 and 14, 2018, and “Hypno Hype”, featuring Master Hypnotist Asad Mecci, on February 3, 2018.