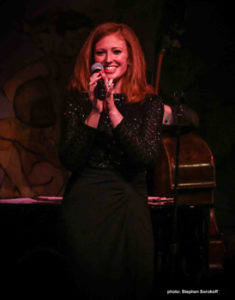 Marissa Mulder will perform her acclaimed Shelter from the Storm: The Songs of Bob Dylan, on Friday, April 27 at 7pm, at the Schorr Family Firehouse Stage in Johnson City.

The cabaret is sponsored by Mondorf & Fenwick, CPAs, and will feature songs like “Masters of War”, “The Times They Are A-Changin’” and “A Hard Rain’s Gonna Fall”, as well as biographical tidbits about the singer and poet, focusing on his beginnings in Minnesota, his early career in NYC’s Greenwich Village, and his meeting with folk legend Woody Guthrie.

“Marissa has a beautiful voice, and everyone who saw her Tom Waits show in 2014 loved it,” said Naima Kradjian, Goodwill Theatre CEO. “We are so glad to bring her back to perform the iconic songs of Bob Dylan.”

Marissa Mulder moved to New York City in 2007 from Syracuse, and has since become one of the most successful young cabaret artists on the Manhattan scene. In 2011, she beat out 60 other singers to win the MetroStar Challenge at the Metropolitan Room, an “American Idol” type contest for emerging cabaret artists. Since then, she has performed in several of her own shows. Stephen Holden of the New York Times called her show “Tom… In His Words, the songs of Tom Waits”, “Far and away the season’s best show, everything the genre can be but almost never is.” She is the winner of the 2013 Noel Coward and Julie Wilson Award which were presented to her at Lincoln Center, where she also sang. She was the winner of the 2014 MAC award for Major Artist and Album Of The Year. She also won the 2014 Bistro Award for vocalist of the year. TimeOut NY named her “Rising Star of The Year” in 2013 and has called Marissa “one of the biggest breakout successes of the past five years”. She was a featured guest on “Piano Jazz” on NPR. In New York City, She has performed at The Carlyle, Lincoln Center, Town Hall, Carnegie Hall, The Algonquin Hotel, 54 Below, Joe’s Pub, Birdland,  The Metropolitan Room and many others. She has taken her shows on the road to Dallas, St. Louis, Florida, Colorado, Nebraska, Buffalo, Syracuse, Rochester, and many more. Her show “Marilyn In Fragments” earned a rave review from the New York Times, who said, “the rising cabaret singer Marissa Mulder wove passages from Monroe’s diaries and 20 songs into a compelling portrait of the star in a confessional mood… a remarkable performance.” For more, visit: marissamulder.com

“I love telling stories in songs and that’s exactly what Dylan’s music does,” said Mulder. “It’s remarkable that he wrote famous protest anthems when he was barely 22 years old. He became the voice of his generation, and what’s amazing is these songs that resonated so deeply with people in the 1960s mean just as much, if not even more, today.”

Other upcoming Goodwill Theatre performances include a jazz concert featuring former Ray Charles “Raelette” Cynthia Scott, on Sunday, April 29 at 2pm; ArtsPower’s “Nugget and Fang” on Saturday, May 12; and the Mason Warrington Orchestra on Sunday, May 20.