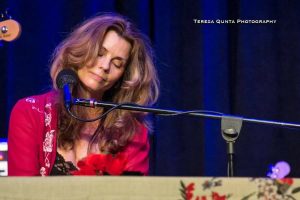 For pianist Jeannie Austin, a tribute show to the music and life of legendary singer songwriter Carole King was an idea whose time had come.

“It started off as a duo of myself and Ori (Huberman) as a simple little duo, hey, do you wanna learn some Carole King songs and be the opening act for a show?” Austin said. “We did that and it went over so well. And then the agents found us in NY and it evolved from a guitar and a piano – very acoustic and unplugged – to now having six members and full on production with a script, monologues, graphics and visuals, dancing. It’s not just a band, it’s a production.”

Austin, Huberman and the rest of that production will be appearing in Johnson City as Tapestry: Tribute to Carole King takes the stage at 5 p.m. Sunday, Nov. 4  at the Schorr Family Firehouse Stage.

“We are all musicians and we all play in different bands and we’ve all played in the tribute scene, but this situation was different because nobody else was doing it, thank goodness, and agents found us at a time that was perfect,” Austin said.  “[The multiple Tony Award-winning musical]Beautiful had just come out and Carole King had just gotten  honors (including a Grammy Lifetime Achievement Award, the Gershwin Prize and Kennedy Center Honors in 2015) and was experiencing a huge resurgence. The timing was right and every show was sold out.”

The list of hit songs King either wrote or co-wrote is extensive and many were huge hits for other artists, too, including (You Make Me Feel Like) A Natural Woman, You’ve Got a Friend, Up on the Roof, Take Good Care of My Baby, Some Kind of Wonderful, So Far Away and Pleasant Valley Sunday.

“I say at the beginning that I bet everybody knows every song that we play tonight” Austin said. “And they do!”

What’s more Austin said these songs, together with the monologues and storytelling and visuals strike more than musical chords; they strike emotional chords.

“It makes it more intimate because we have pictures of her from throughout her career, and her private life and her musical life that really have an impact on the songs we are playing, images that are specific to that song, so it really has an emotional impact,” Austin said. “People really appreciate it. After every show we do a meet and greet and people are really appreciative.”

Austin says she feels lucky to be doing what she is doing.

“We are very happy to be playing those songs because it makes us happy and it makes a lot of people happy,” she said. “These songs are huge in people’s lives. It’s pretty great.”