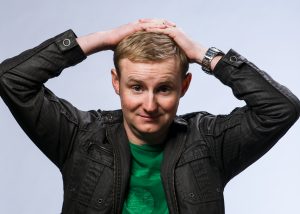 Goodwill Theatre will offer an acclaimed one-man comedy show at the Schorr Family Firehouse Stage in Johnson City on Friday, October 26 at 7pm.

“Lesson Plans to Late Night” is focused on the hilarious things children say and do, and includes stories of real-life experiences with Bohn’s own family – he and his wife, who is also a teacher, have a daughter, Ella. Features include kids’ hilarious answers from homework and tests, and a story about flawlessly impersonating a Tickle-Me-Elmo doll.

“If you’ve ever worked with children or have kids or grandkids, this is the perfect show for you,” said Naima Kradjian, Goodwill Theatre CEO. “Teachers will definitely not want to miss this hilarious and relatable performance.”

Lucas Bohn tours over 45 weeks a year and headlines shows at colleges, theaters and on cruise ships all over the globe. He has shared the stage with Dave Chappelle, Jimmy Fallon, and Kevin Hart. In 2013 Lucas was nominated for “Comedian of the Year” by Campus Activities Magazine. Lucas placed runner-up in the Magners Comedy Festival and was awarded “Best of the Fest” at the Detroit Comedy Festival.