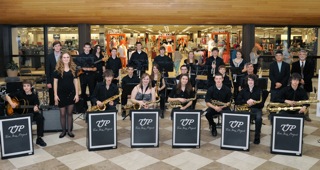 Talented young musicians, encouraging mentors and smokin’ hot jazz music will set the Schorr Family Firehouse Stage on fire on Wednesday, April 19 at 7 pm, with the Teen Jazz Project. This community-based jazz program is devoted to promoting live jazz music in the Triple Cities area. The Teen Jazz Project performance is part of the Goodwill Theatre’s All That Jazz Series, and proudly sponsored by the Oakdale Mall.

“We believe that music is an essential part of any thriving community. To this end we are introducing an opportunity for up and coming teen musicians in our community to learn from experienced musicians and music educators,” say project coordinators and mentors, Tony Alduino and Dan Miller. “The directors and mentors involved in this project hope to pass along a love for jazz music to the next generation. Our goal is to provide a welcoming environment where area teen musicians can learn to play, improvise and perform the unique art form that is jazz.” The Teen Jazz Project recently performed for the residents at the Hilltop Campus in Johnson City and will be at the Good Shepherd Village in Endwell.

Anthony Alduino is a retired music educator from the Susquehanna Valley School District where he taught for 28 years. He is an active musician in the Southern Tier where he is frequently called upon to perform with many groups such as the Sammy Kaye Orchestra, Al Hamme’s Music Unlimited and Swing Street, the Terry Walker Project and the Southern Tier Concert Band. He has performed with John Pizzarelli, the Temptations, the national tours of “Chicago-the Musical” and “The Rat Pack is Back”, the BC Pops Orchestra, the Binghamton Philharmonic, Katie Scott and Millenium, the Scott Freeman Band, Prism, several EPAC productions and the Ringling Brothers and Barnum & Bailey Circus. Mr. Alduino is also the baritone saxophonist with the Empire Saxophone Quartet, a professional ensemble of the highest caliber.

Tickets for The Teen Jazz Project are $5 plus a donation to CHOW, and may be purchased online at www.goodwilltheatre.net/?a=events or by calling the theatre Box Office at 607-772-2404, ext. 301.