The Goodwill Theatre will present “The Bitchy Waiter” at the Schorr Family Firehouse Stage on Friday, October 18 at 7PM and Saturday, October 19 at 2pm. 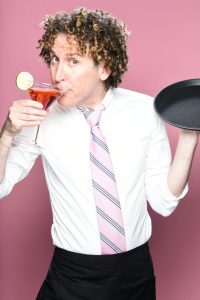 pay job. Like many in the New York entertainment business, Cardosa was supporting himself by waiting tables; then one day he had an idea.

“I started a blog in December of 2008 and it really just started because I was having a frustrating day at my restaurant job, I came home and literally just Googled ‘blog’ and started a blog post” Cardosa said. “It was just for myself and for my friends who I worked with. It started out as just a way to vent my frustrations, but I just kept doing it and now it has turned into something much bigger than I ever anticipated it being.”

Cardosa has parlayed his discontent into a book deal and appearances on numerous TV shows, including the Today Show, Dr. Phil and Dr. Oz, all while becoming an advocate (his Web site has links to legal services for food industry employees) and voice for food service workers everywhere. He says what they all are thinking and sometimes he sings it. To show tune melodies with piano accompaniment. And that is The Bitchy Waiter

“The show came around about five years ago,” he said. “I have always been an actor and I singer and I thought it would be fun to take some stories from the blog and do some storytelling and kind of mix them with songs that would further the story. It ended up being super fun and it’s really fulfilling. I am so excited to do these shows.”

Cardosa said he still holds down a waiting job and has been working at the same restaurant now, a small, low-key American bistro in his neighborhood, for eight and a half years, but he is down to one shift a week. He did have a stint in fine dining a while back, but they didn’t appreciate Cardosa emerging career. And scathing humor.

“They fired me. They didn’t like my sense of humor,” he said. “But it makes for a great moment on the show, though.”

Cardosa believes that servers and former servers will recognize his trials and tribulations and that those who have never waited tables will get a glimpse, often very amusing, behind the scenes.  Of course, taking aim at the foibles of the restaurant-going public can have its somber moments. Take, for example, an older couple Cardosa has waited on many times over the years.

“They still come into my restaurant. They have no idea that they have become the main characters in my show and in my book,” Cardosa said, adding that over the years they have developed a cordial relationship.  “I work in my neighborhood and I see them in the grocery store. I feel kinda bad, but it’s OK. They don’t know.”

The Schorr Family Firehouse Stage, located at 48 Willow Street located on the corner of Corliss Avenue and Willow Street in Johnson City, accepts cash, checks and all major credit cards. Doors open approximately one hour before show time. General admission seating is based on a first-come; first-served policy.

For more information contact the Goodwill Theatre Box Office at (607) 772-2404, ext. 301, or visit the Theatre online at goodwilltheatre.net.