The first cabaret show of the Goodwill Theatre’s tenth season at the Schorr Family Firehouse Stage will be Tom Michael and Beckie Menzie’s The Piano Men, a tribute to the music of Billy Joel, Barry Manilow, and Michael Feinstein, on Friday, November 10 at 7pm.

The show features popular songs such as “Weekend in New England”, “Could It Be Magic?”, “New York State of Mind”, and, of course, Joel’s “Piano Man”.

Tickets are $25 for adults and $20 for senior citizens and students, and can be purchased online or by calling the Box Office at (607) 772-2404, ext. 301. The Songbook Cabaret series is sponsored by Mondorf and Fenwick.

“This show got rave reviews in Chicago,” said Naima Kradjian, Goodwill Theatre CEO. “Joel and Manilow have some truly unforgettable, once-in-a-generation original songs, and Michael Feinberg’s repertoire includes so much of the Great American Songbook.” 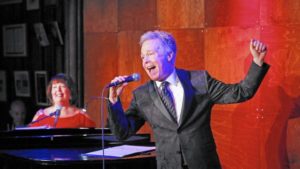 Beckie Menzie and Tom Michael are an in-demand cabaret duo in Chicago, and they have performed to audience and critical acclaim around the world. They are known for their unique blend of whimsy, nostalgia and unquestionable talent, and their imaginative musical twists on jazz favorites, standards, contemporary pop, Broadway show tunes and film gems. Cabaret Scenes Magazine described the pair as one of the “Top Ten Cabaret Acts,” and they have appeared on some of the country’s most prestigious stages, including New York’s Carnegie Hall and Lincoln Center. Their recording efforts have been praised by Billboard, BackStage, Show Business Weekly and Playbill.

Beckie Menzie’s rich voice and expert piano stylings sizzle on everything from sassy swing to smoky torch songs. She is a three-time winner of After Dark Chicago’s “Outstanding Cabaret Artist” award, the Chicago Gold Coast Cabaret Award winner, and The Chicago Tribune called her “indispensable to Chicago Cabaret.” Beckie was featured in Michael Feinstein’s “Now & Then” Series for her Carnegie Hall debut and has two critically-acclaimed CDs.

With a voice that Billboard Magazine describes as, “…a revelation,” Tom Michael’s warm, expressive style and charismatic tenor breathe new life into cabaret standards and reveal why BackStage Magazine has called him “one of the most striking singers to emerge in the last few years.” His most current solo CD, “Written in the Stars,” received international critical praise and was named “Best CD of the Year” by Show Business Weekly Magazine, After Dark Chicago and WDVR-FM radio. 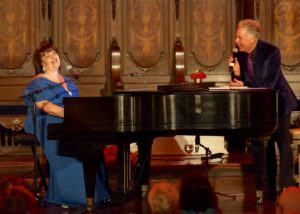 Other cabaret performances in the Schorr Family Firehouse Stage’s tenth season include Durante!, a tribute to the late, great, Jimmy Durante featuring Grover Kemble, on Sunday, March 4, 2018; and Shelter from the Storm: The Songs of Bob Dylan, performed by Marissa Mulder, on Friday, April 27, 2018.