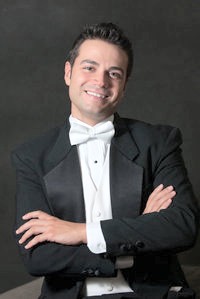 Tenor Steven Nanni, to perform Rat Pack era jazz and popular standards with Retro Lounge at the Schorr Family Firehouse Stage on Friday, October  5 at 7 PM and Sunday, October 7 at 2PM. Nanni’s performance is a part of the Goodwill Theatre’s 2018-19 Season, sponsored by M&T Bank and IBM.

“Last time Steven Sang Italian Favorites at the firehouse and he brought the house down. He is charming and funny in addition to being a wonderful singer! It will be a real treat.” says Naima Kradjian.

“For this show, I want to take the audience on a musical tour to the days of Dean Martin and Frank Sinatra,” said Nanni.

Tenor Steven Nanni was described as “a world-class tenor who has natural musicality, artistic instinct and vocal talent…” by the Irish Times, and “a singer from the old school of bel canto and expressive line; a complete musical instrument and artist” by Juilliard professor Nico Castel.

Steven attended the Conservatorio di Musica “Giuseppe Verdi” di Milano Internazionale under the direction of Guido Salvetti. Steven also attended the Accademia Nazionale di Santa Cecilia and the Music Conservatory of Westchester in White Plains, where he studied with Soprano, Renata Scotto. Steven has also been a student and colleague of the celebrated diva Montserrat Caballe and under the baton of Placido Domingo at the Washington National Opera, including its young artists program.

Steven is professor of Vocal Methods, artist in residence, and director of the opera program at Hartwick College, Oneonta NY. Steven currently serves on the faculty of the Narnia Arts Academy in Umbria Italy, and maintains a private voice studio in Binghamton NY, and in New York City.