The Sister is Back with Sister’s Christmas Catechism 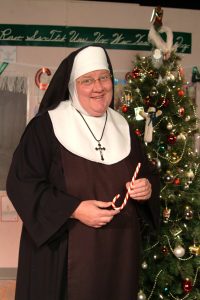 After enormous success with “Late Nite Catechism”, Goodwill Theatre will offer a Christmas-themed sequel to the interactive one-woman comedy at the Schorr Family Firehouse Stage in Johnson City, December 7 & 8 at 7pm, and December 9 at 2pm.

“Sister’s Christmas Catechism, The Mystery of the Magi’s Gold” is a holiday mystery extravaganza from the author of “Late Nite Catechism”. It’s “CSI: Bethlehem” as Sister takes on the mystery that has intrigued historians throughout the ages – whatever happened to the Magi’s gold? (“We know that Mary used the frankincense and myrrh as a sort of potpourri – they were in a barn after all.”) Retelling the story of the nativity as only Sister can, this hilarious holiday production employs Sister’s own scientific methods, assisted by a local choir as well as a gaggle of audience members. Sister creates a living nativity unlike any you’ve ever seen.

“After last year’s success we are excited to once again offer Sister and her bundles of laughs to our audience,” said Naima Kradjian, Goodwill Theatre CEO.

Tickets are $35 for adults, $30 for senior citizens and students, and can be purchased online at goodwilltheatre.net or by calling the Box Office at (607) 772-2404, ext. 301. The performance is underwritten by the Schorr Family, and may not be appropriate for young children.

Colleen Moore has enjoyed playing the role of Sister in national tours and off-Broadway for several years. Moore was taught by Sisters of the Holy Cross at Blessed Sacrament School and at St. Mary’s High School in Alexandria, Virginia. She currently lives in New York City.

Other upcoming comedy events include “Bam! It’s Magic!” on January 18 and 19; and “Italian Bred” on February 9.