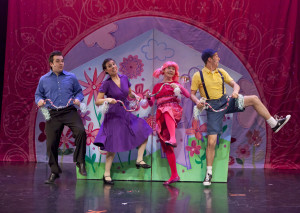 Based on the children’s book, Pinkalicious is a musical that is fun for all ages and teaches us that you really can have too much of a good thing.  Pinkalicious can’t stop eating pink cupcakes despite warnings from her parents. Her pink indulgence lands her at the doctor’s office with Pinkititis, an affliction that turns her pink from head to toe – a dream come true for this pink loving enthusiast. But when her hue goes too far, only Pinkalicious can figure out a way to get out of this predicament. The Firehouse will have lots of pink merchandise and delicious pink delectables for sale. Attendees are encouraged to wear… you guessed it PINK! Come see Pinkalicious on Saturday October 17th, at 11:00 am, 2:00 pm, and 5:00 pm.  Pinkalicious is part of the Just 4 Fun Series and is sponsored by Bob Car 2.0 Printing and Mailing and Modern Marketing Concepts.

“I will be wearing pink for this show and can’t wait to see the audience having a delightful time,” says Naima Kradjian CEO of Goodwill Theatre. “We always provide hands on activities for children 1 hour before each show and we look forward to watching the children have fun.”

The Pinkalicious character was inspired by Victoria’s real life daughters – two girls with vibrant imaginations who love cupcakes, dress up, playing princess, and all things pink. Recently Victoria’s husband, a toy designer, built a tree house for their Princess Pinkerbelles. She often hears galloping in the house and wonders if it’s Goldilicious or just her Pinkerellas.

PINKALICIOUS, THE MUSICAL, began at Vital Theatre Company’s home theater at 76th Street and Broadway in 2006. After completing its initial sold-out six week run it moved to the SOHO PLAYHOUSE where it enjoyed an extended run through summer of 2007. In January of 2008, the production re-opened at midtown’s New World Stages, where it ran through September of 2008. In November of 2008, the production moved to the Bleeker Street Theatre at 45 Bleecker. The production then moved to the MMAC (Manhattan Movement & Arts Center). It has since returned to its New York home at the theatres at 45 Bleecker, and has been touring the US and Canada for over four years.

Lyricist, composer and orchestrator John Gregor also created With Glee (Book, Music and Lyrics) which opened Off-Broadway at the Kirk Theatre to sold out audiences and rave reviews. WITH GLEE is the recipient of a Loewe family sponsored reading at the NYU Frederick Loewe theater. He is also composer and lyricist of Pinkalicious The Musical, based on the book by Elizabeth and Victoria Kann. His musical adaptation of Gogol’s tragicomic short story The Overcoat (Book and Lyrics) has been presented in London at the Bridewell Theatre, Barrington Stage Company and The New York International Fringe Festival. John has also been commissioned to write several young audience musicals, including The Bully at Vital Theatre, NY and The Invention Of Edison at Pittsburgh Civic Light Opera. John Gregor lives in New York and holds an MFA in musical theatre writing from New York University’s Tisch School of the Arts and a degree in musical theatre from Emerson College.

Elizabeth Kann & Victoria Kann (Book & Lyrics) are co-authors of the New York Times best-selling children’s picture books PINKALICIOUS (HarperCollins, 2006) and PURPLICIOUS (HarperCollins, 2007) that Victoria also illustrated. Elizabeth and Victoria are sisters who grew up in Brooklyn, New York. Victoria’s award-winning artwork has graced the covers and pages of many magazines, newspapers, and books. Elizabeth’s writing has appeared in a variety of newspaper and print publications. To learn more about the sister duo and their books, visit them online at their website at www.thinkpinkalicious.com.

Director Teresa K. Pond has produced and directed numerous plays, musicals, and opera during her seven-year tenure as Producing Artistic Director of ACT (Alaska). Musicals include WEST SIDE STORY, THE MUSIC MAN, THE WIZARD OF OZ, CAMELOT and HONK! Regional work includes MACBETH, TARTUFFE, LYSISTRATA, THE MAN WHO CAME TO DINNER and OF MICE AND MEN. Her award-winning production of HALF LIFE was hailed as the top show of The New York International Fringe Festival (FringeNYC) in 2005 (New York magazine). Recent work includes: EXTRAORDINARY! at Vital Theatre Company, PERFECT WEDDING and RUN FOR YOUR WIFE at Millbrook Playhouse.

Vital Theatre Company , located in New York City’s Upper West Side at 76th and Broadway, commissions new musicals for children and families. Since its founding in 1999, Vital Theatre Company’s Family Series has been honored with two Awards For Excellence by the Off Off Broadway Review and received high acclaim from audiences and critics alike for being “a wonderful place for parents to introduce their kids to the glories of live theatre, done well and at modest prices.” Now in its twelfth season, the company is dedicated to producing entertaining and educational theatre for young audiences. To date, the company has presented 50 original productions for over 160,000 children and their families. For more information about how to get involved, how to contribute or for information about theatre rentals, please visit Vital Theatre Company on the web at VITALTHEATRE.ORG.

Tickets for Pinkalicious are $15 for adults, $10 for seniors and children. The Firehouse offers a 20% discount to veterans and teachers; however, discounts cannot be combined. Tickets can be purchased online at: www.goodwilltheatre.net or by calling the Box Office at (607) 772-2404, ext. 301.