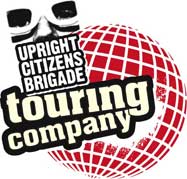 The Upright Citizens Brigade Tour Company will host an evening of the best longform improv on the East Coast at the Schorr Family Firehouse Stage on Thursday, October 24 at 7 PM. Named “Hot Farm Team” by Rolling Stone magazine and “Best Comedy Club” by The Village Voice, The UCB Theatre is widely recognized as home to today’s funniest actors and writers. The touring arm of UCB (UCB Touring Company) brings the most innovative and hilarious comedians from UCB’s New York and Los Angeles theaters directly to you. The hand-picked cast is sure to delight and is known for presenting the nation’s next wave of comedy superstars.

The performers on Thursday night include: Zach Willis, an Emerson College graduate who has been with UCB since 2009; Dru Johnston, an actor, writer and improviser who has contributed to The Onion News Network and was named one of the worst Morgan Freeman impressionists by Maxim; Laura Wilcox, an actress, improviser, and writer who has appeared on MTV’s Hey Girl, Comedy Central’s Inside Amy Schumer, a national campaign for Bing, and The Cooking Channel’s premiere comedy show, Fodder, as well as videos featured in The Huffington Post, Vulture, CNN, MSN, Jezebel, LandlineTV, College Humor/Jest, and Atom.com; and Don Fanelli, an actor in many UCB Theater productions, as well as appearances on 30 Rock, The Late Show with David Letterman, MTV’s Failosophy, Hey Girl, and Girl Code, Comedy Central’s Inside Amy Schumer, and in various College Humor, UCB Comedy, and LandlineTV videos.

“We are very pleased to have the Upright Citizens Brigade Touring Company perform here again this season,” said Naima Kradjian, Goodwill Theatre CEO. “Our comedy series was a great success last season and we are very excited to have them back three times. We’ve heard some people want more entertainment choices during the week, so we are experimenting with a Thursday show.”

Longform improvisation was pioneered by Del Close in Chicago at the Improv Olympics and was brought to New York City by the Upright Citizens Brigade. In longform improvisation, performers create an entire show consisting of interconnected scenes, characters, and ideas completely made-up on the spot with no pre-planning or pre-writing.

The Upright Citizens Brigade (Matt Besser, Amy Poehler, Ian Roberts, and Matt Walsh) came to New York, from Chicago, in 1996. Noticing an absence of “Chicago-style” longform improvisation in the city, the four members of the UCB launched a training program in 1997. The UCBT quickly became the place for great, cutting-edge, comedy. Casting directors, agents, festival producers, and journalists began to flock to the theater to see the best comic talent in the city. As buzz for the theater grew, the training program expanded with hundreds of students learning the art of improvised theater. The UCB Theater at 307 West 26th Street continues to offer the best and most innovative improv, sketch, and stand-up comedy in the city every day of the week, every week of the year. In addition to the performance space, UCBT is home to an intensive Improv Guerilla Training Center where students learn the art of improvisational and written comedy. In 2005, the UCB Theatre LA opened to make the UCB Theatre the only bi-coastal sketch, improv, and comedy theatre in the country.

Tickets for The Upright Citizens Brigade Touring Company are $15 for adults, $12 for seniors and students. You can purchase tickets online at: www.goodwilltheatre.net or by calling the Box Office at (607) 772-2404, ext. 301.

The Schorr Family Firehouse Stage, located at 46-48 Willow Street in Johnson City on the corner of Corliss Avenue & Willow Street in Johnson City, accepts cash, checks and all major credit cards. Doors open approximately one hour before show time. General Seating is based on a first-come; first-served policy. Refreshments will be available for sale.

The Schorr Family Firehouse Stage is the first performance venue of the Goodwill Theatre Performing Arts Complex & Professional Training Facility. Patrons are advised to enter the facility through the parking lot on Corliss Avenue. Parking is available in a small lot at the theatre, and a new lot along the side of the building, on-street, and in various Village municipal lots within two blocks of the theatre. For more information, interested persons can contact the Goodwill Theatre Box Office at (607) 772-2404, ext. 301, like us on Facebook.com/Firehouse.stage or visit: www.goodwilltheatre.net